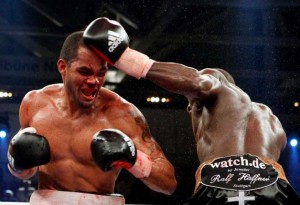 Hernandez (25-1, 13 KOs) became the new IBF cruiserweight champ via 6 round technical decision in an upset win over Philadelphia’s Steve Cunningham (24-3, 12 KOs) on Saturday.

After being sent to the canvas in the first round and seriously hurt via Hernandez left hook high on the head, Cunningham recovered and boxed well for the remainder of the fight, taking four of the five remaining rounds of the contest on The Boxing Tribune’s unofficial scorecard.

However, cuts suffered from an apparent intentional headbutt by Hernandez in the third round (ruled accidental) and a clash of heads at the end of the sixth round brought about the end of the fight and prematurely put the decision in the hands of the judges.

While judge Howard John Foster had Cunningham taking the bout, 57-56, the other two judges, Dave Parris and Pawel Kardyni saw the fight in favor of Hernandez, issuing scores of 58-55 and 59-54, respectively. The Boxing Tribune scored the fight 57-56 in favor of Cunningham at the time of the stoppage.

The awkward Polish southpaw, Proksa, was in command throughout the contest, cutting Sylvester early, stunning him, and generally brutalizing the former world champ en route to an RTD 3 victory.

Newport Leisure Centre, Newport, Wales, United Kingdom– Welsh former world titlist, Gavin Rees (35-1-1, 16 KOs) kept his European lightweight title via technical draw when an accidental headbutt broke the nose of challenger, Derry Matthews (29-5-1, 15 KOs) before the fourth round could be completed. Rees was ahead on all three scorecards, 29-28, at the time of the stoppage.