Coliseo Ruben Rodriguez, Bayamon, Puerto Rico– On a night of mismatches from Puerto 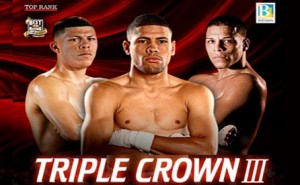 Rico, fringe contender, Mike Oliver (25-3, 8 KOs) had a good 40-second spurt of energy, backing up the former featherweight titlist, Juan Manuel Lopez (31-1, 28 KOs), with a flurry of quick arm punches before settling into his role as opponent for the rebuilding boricua star.

A minute after his offensive surge, Oliver was sent to the canvas from a Lopez left hand counter and then dropped again right before the end of the first.

Oliver came into the second round with no legs and did his best to survive, but was sent back to the canvas in the second half of the round. The native of Hartford, Connecticut beat the count, but showed no real interest in continuing, prompting the ref to wave off the bout with 28 seconds left in the round.

On the undercard, Roman “Rocky” Martinez (25-1-1, 16 KOs) returned to the ring for the first time since losing his WBO super featherweight world title to Ricky Burns 13 months ago, stopping an overmatched and faded Daniel Attah (26-8, 9 KOs) in six rounds and dropping the Washington DC-based Nigerian three times along the way.