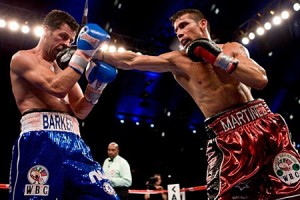 one-sided farce featuring one of the sport’s three best talents against a second-tier European regional titlist. However, what they ended up seeing was how a well-trained, disciplined professional fighter could be competitive against a much more talented fighter by just employing basic boxing fundamentals.

Sergio Martinez (48-2-2, 27 KOs) came into the contest a huge betting favorite and acted the part early, fighting with his hands down, chin out, and with little regard for the ability or intelligence of his opponent.

But London, England’s Darren Barker (23-1, 14 KOs), fought intelligently, failing to be lured into a brawl by Martinez’s hands-down defense. Barker fought behind a high guard, employing a stiff jab and sharp, straight right hand to bloody the undisputed middleweight champion’s nose and keep the contest relatively even through eight.

Little by little, though, Martinez began to wear down Barker with body shots and quick counters. Barker, who has shown signs of late fading in previous bouts, looked dead tired and vulnerable by the tenth round.

In the eleventh, a mostly blocked combination of punches, punctuated with a solid right hand behind Barker’s ear sent the Brit to the canvas, unable to beat referee Eddie Cotton’s ten count.

Like their first encounter in 2008, Lee took an early lead with his clearly superior skills and scored an early knockdown against the crude brawler (Vera was down in the first round in 2008 and dropped in the second in this contest). However, this time, Lee kept his poise and focus, outclassing Vera through the full ten and refusing to allow Vera to put any real pressure on him.