A defensive, low-action boxing fight is often referred to generically as a “chess match”. Well, Saturday night on pay-per-view, fans will get the Sweet Science’s answer to Garry Kasparov vs. one of those IBM-built chess computers that will enslave the human race once they become sentient. Chad Dawson is playing the human here, while the role of our new robot overlords will be 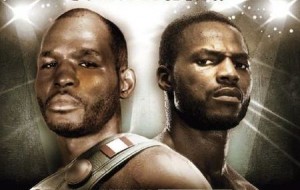 The card itself promises to be Exhibit A for why people who buy pay-per-views should watch all the fights; the most entertaining fight of the night is almost sure to be one of the sideshow attractions. With a junior welterweight title eliminator between two guys with nitroglycerin fists and a lightweight championship bout between combatants with high KO percentages and suspect chins, those looking for fireworks will get their money’s worth on the undercard.

Today we look at all the televised fights, from the first-to-air undercard to the main event:

A good argument could be made that this fight should have been swapped out for the Collazo-Hernandez scrap on the undercard. Paulie Malignaggi, who looks like a Jersey Shore cast reject and punches like he’s an amorous teenage girl giving her boyfriend a love tap, takes on Mexican bruiser Orlando Lora in the opening televised bout of the evening.

Malignaggi, besides being known for having less power in his fists than an old lady in a Florida retirement community has in hers, is probably best known as having held the IBF strap at junior welterweight at a time when his competition in title fights was against the likes of Lovemore Ndou and Herman Ngoudjo. Whenever he’s fought real championship-caliber fighters, he’s been beaten, including getting knocked out by Ricky Hatton and Amir Khan. “Magic Man” is more durable than his two KO losses would indicate, since in both cases the end came in the eleventh round, meaning it takes quite a few swings of the ax to chop down the proverbial tree.

Meanwhile, Orlando Lora is seeking to prove that he is something other than a club fighter with a fancy record and no real quality opponents. His lone loss, an eight-round demolition at the hands of gatekeeper David Estrada on ESPN2 in April of 2010, showed that he may not have what it takes to make that next step from prospect to contender. A look at the won-lost records of the 28 men to fall in defeat before the Mexican reads like the won-lost records of the opponents for college football factory schools during homecoming week. Lora’s last victim, Daniel Yocupicio, is 4-19-2 with ten knockout losses…and Lora wasn’t able to get rid of him despite having eight rounds to make the attempt.

This fight promises to be a pitter-pat soft touch contest, exactly the sort of fight that plays to Malignaggi’s strengths. For the New Yorker, another loss will very likely close the door on ever fighting for a world title again. For the Mexican, only a victory will silence the critics who say he’s just another puffed-up non-prospect with a gaudy record far in excess of his merits as a fighter.

Kendall “Rated R” Holt is as tough as you’d expect a guy from a place like Paterson, New Jersey to be. Left for dead after consecutive losses to Timothy Bradley and Kaizer Mabuza, Holt had nearly a year layoff before first spending 1:50 to dispatch tomato can Lenin Arroyo (who took his fourth straight KO loss and has not fought since) and then making a “remember me?” statement in an absolutely spectacular Knockout of the Year candidate against Julio Diaz on ESPN May 13th. It’s a funny thing how putting someone’s lights out with dynamite on national television can revitalize one’s career, and Holt gets a chance to fight for a minor WBO regional belt and a chance to show even more viewers that the losses from two years ago are truly ancient history.

Meanwhile, Danny Garcia, undefeated prospect, gets to add a signature win to his resumé. Garcia has beaten the who-dats and B-grade fighters in the division, with wins over Mike Arnaoutis (effectively ending the Greek’s career), Ashley Theophane, and most recently a badly washed-up Nate Campbell which drove the final nail into the coffin of Campbell’s career as a contender. Kendall Holt is the most dangerous opponent Garcia has faced, and this is the kind of fight that separates fringe contenders from the kinds of guys who can make fine arguments for title shots.

Both the WBC and the IBF have marked this bout as a title eliminator, a rare case of two sanctioning bodies agreeing on anything beyond the love of money. If rumors of Amir Khan vacating his titles to challenge the likes of Floyd Mayweather at welterweight are true, the winner of this contest may be the next IBF junior welterweight champion of the world since the winner will be in line to fight for the vacant belt. In addition, the WBC giving this fight their blessing means that the winner may also get a shot against Erik Morales for that organization’s world title belt. This fight has major implications for the division, and beyond that it is a contest between two guys with proven knockout power.

Humberto Soto’s reign as WBC lightweight champion came to an end in July of this year when he relinquished the belt in order to move up in weight and campaign at 140 pounds. Since nature abhors a vacuum, a champion must be found, and this battle between DeMarco and Linares will settle the score as to who will be spoken of among the top dogs in the lightweight division. While Juan Manuel Marquez remains the consensus champ at 135, he cannot fight forever (all the more so if he gets pulped by Manny Pacquiao next month) and the next true champion will come from the ranks of the current beltholders.

Antonio DeMarco got this shot by virtue of beating Reyes Sanchez eight months ago for the WBC’s Grade B “Silver” lightweight belt. He holds the distinction of having been the last victim of the great Edwin Valero before Valero’s personal problems ended the Greek tragedy that was his life. DeMarco’s wins have been over fringe contenders; among his victims are guys like Anges Adjaho, Daniel Attah, and the aforementioned Reyes Sanchez, while his two losses have been to Valero (by 9th-round TKO) and the 3-2 at the time of the fight Anthony Vasquez, who handed DeMarco the first blemish on his record after he had knocked out seven of his first eight pro opponents.

Jorge Linares is the much smaller man here, having come through the ranks at weights as low as 122 pounds, while DeMarco has been a lightweight for the majority of his career. Linares has been a world champion at featherweight and at junior lightweight and holds a distinct advantage in experience and level of competition over his opponent that may make up for the size difference. The Mexican fighter’s signature win was against Oscar Larios for the WBC featherweight strap in July of 2007, a belt that Larios would recapture for himself when Linares moved up to campaign at a higher weight.

Both men in this contest have knockout power; DeMarco has knocked out 72% of his victims while Linares has stopped 64.5% of his. In addition, both men have had their chin fail a test. DeMarco, as mentioned, fell to Edwin Valero, and Jorge Linares found himself stopped in the very first round against Juan Carlos Salgado in a world title fight. When big punchers meet suspect chins, good things (from the point of view of the fan) tend to follow, so don’t get up for a snack or you might miss a monster highlight.

The winner takes a belt; the loser, especially if the fight is close, can keep himself in the discussion for another shot down the line, as the lightweight division is well-stocked with guys like Juan Manuel Marquez who are closer to retirement than to locking down the division Klitschko-style for years to come. If either man loses in blowout fashion, however, it will take a lot longer to resurrect his career than if this fight is close and competitive.

Somebody needs to examine Bernard Hopkins to make sure he’s human and not an android built by a mad scientist with a love of boxing matched only by his love of cybernetics. Only mechanical muscles and a positronic brain could possibly explain how a 46-year-old man continues to ply the Sweet Science like a master of the craft who made his pro debut so long ago that his challenger, who at 29 is young enough to be his son, was drawing pictures in a first grade classroom.
In many ways, although the two men are not related by blood or marriage, the analogy of father and son works. Hopkins is the old man relying on guile, experience, and technical mastery while Dawson is long on talent and short on technique. Much like an old father keeps his son off him in the driveway basketball court and settles for a time-tested jump shot, so too will Hopkins seek to keep Dawson on the outside at the end of his long, perfectly-timed jab. Dawson, who showed a distinct unwillingness to engage in anything more than spots against Jean Pascal, will have to adjust his strategy and keep constant pressure on the older, slower Bernard Hopkins, keeping him on the ropes and making sure that his hands are able to stay free and move rather than allowing himself to be tied up.

This fight is almost sure to go the distance, since Hopkins hasn’t knocked anybody out himself since dispatching Oscar De La Hoya over seven years ago and the legendary pride of Philadelphia has never heard the number ten yelled by a referee standing over him. Meanwhile, Dawson’s nearest thing to a stoppage was a decidedly halfhearted attempt to use a cut over his eye in the 11th round of his fight with Jean Pascal as an excuse for a fight he was losing. Some may question Dawson’s toughness—if a headbutt or a punch opens up another cut and Dawson is doing anything other than dominating Hopkins, will that Achilles’ heel be his downfall?

Fans of all-action, spectacular-knockout sort of fights may find little to enjoy here, but for the hardcore fan who truly loves strategic, tactical, defensive masterpieces, Bernard Hopkins and Chad Dawson may very well deliver the goods. Or Dawson will rush in, Hopkins will expertly tie him up to keep him from doing damage on the inside, and this fight will devolve into a cuddle-fest more suited to couples watching chick flicks than professional boxers trying to knock each other’s heads off.

This is not to say the pay-per-view as a whole does not promise plenty for the customer dollar; the action is merely to be found on the undercard. The more bloodthirsty among the fans are strongly advised to tune in early.

The Believe It Or Not pay-per-view hits air Saturday night, October 15th, at 8 PM Eastern/5 PM Pacific from the Staples Center in Los Angeles at a suggested retail price of $49.99. Call your local cable or satellite provider for prices and ordering information.