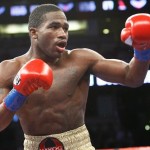 U.S. Bank Arena, Cincinnati, Ohio-- In a bout that was on-again, off-again all afternoon because of Adrien Broner's inability to make any of the pre-fight weight requirements, Broner (24-0, 20 KOs) stopped a game, but overmatched Vicente Escobedo (26-4, 15 Kos) in five rounds on HBO's Boxing After Dark. Broner, set to fight in his hometown, had already given up his WBO super … END_OF_DOCUMENT_TOKEN_TO_BE_REPLACED 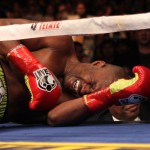 Staples Center, Los Angeles, California-- Believe it or not, with only a couple of real punches landed in little over five minutes of action, Chad Dawson (31-1, 18 KOs) became the WBC light heavyweight champion via TKO when Dawson tossed defending champ, Bernard Hopkins (52-6-2, 32 KOs), to the canvas, causing a bout-ending shoulder injury. The final sequence of the bout … END_OF_DOCUMENT_TOKEN_TO_BE_REPLACED 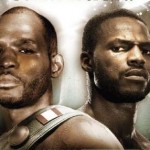 By Fox Doucette A defensive, low-action boxing fight is often referred to generically as a “chess match”. Well, Saturday night on pay-per-view, fans will get the Sweet Science's answer to Garry Kasparov vs. one of those IBM-built chess computers that will enslave the human race once they become sentient. Chad Dawson is playing the human here, while the role of our new robot … END_OF_DOCUMENT_TOKEN_TO_BE_REPLACED 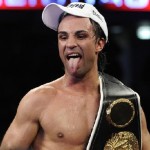 Saturday October 15 from the Staples Center in Los Angeles, California, Paulie “Magic Man” Malignaggi (29-4, 6 KOs) and Orlando Lora (28-1-1, 19 KOs) will meet on the undercard of the HBO Pay-Per-View card featuring Bernard Hopkins and Chad Dawson. Malignaggi’s move up to welterweight followed his May 2010 TKO11 loss to Amir Khan, and was preceded by his split with promoter … END_OF_DOCUMENT_TOKEN_TO_BE_REPLACED

Sunrise, Florida - Andre Berto (26-0, 20 KO) successfully defended his WBC welterweight title for the third time against Carlos Quintana (27-3, 21 KO), starting slowly to eventually stop him in the eighth.Berto struggled early with Quintana's spoiler tactics, before utilising his God given talents to overpower the game Puerto Rican, who lost a point for rabbit punching.After … END_OF_DOCUMENT_TOKEN_TO_BE_REPLACED