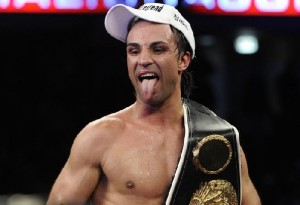 Malignaggi’s move up to welterweight followed his May 2010 TKO11 loss to Amir Khan, and was preceded by his split with promoter Lou DiBella and subsequent signing by Golden Boy Promotions. As a jr. welterweight, the light-hitting Malignaggi captured the IBF title in June of 2007 when he outpointed Lovemore Ndou over 12 rounds. He defended his title twice before he was stripped of his title prior to being knocked out by Ricky Hatton in 11 rounds. Splitting back-to-back fights with Juan Diaz set Malignaggi up with his shot at Amir Khan and his WBA title. Since the move to welterweight, Malignaggi has knocked out journeyman Michael Lozada and scored a unanimous decision victory over Jose Cotto.

Lora was once thought to have been a potential welterweight contender before being knocked out by David Estrada in 2010. Since the loss to Estrada, Lora has won 2 straight against club level opposition with a combined 33-30-4 record.