Staples Center, Los Angeles, California– Believe it or not, with only a couple of real punches landed in little over five minutes of action, Chad Dawson (31-1, 18 KOs) became the WBC light heavyweight champion via TKO when Dawson tossed defending champ, Bernard Hopkins (52-6-2, 32 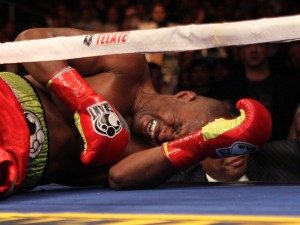 KOs), to the canvas, causing a bout-ending shoulder injury.

The final sequence of the bout came at the end of the second round when Hopkins came in to tie Dawson up, but was lifted off the canvas and deposited on to his left side. While Hopkins squirmed in pain and seemed unable to continue, Referee Pat Russell made it clear that no foul was being called and that the bout would then be ruled a TKO.

Russell’s decision to rule a TKO against Hopkins, despite no fight-ending punches landed from Dawson, will likely be reviewed and, possibly, overturned by the California State Athletic Commission. In the meantime, though, fans attending the live card and those paying upwards of $65 on pay-per-view were left with a bad taste in their mouths.

— The chief support on the PPV telecast featured two prime fighters competing at a high level as Antonio DeMarco (26-2-1, 19 Kos) stopped Jorge Linares (31-2, 19 KOs) in the eleventh round for the vacant WBC lightweight title.

Linares earned an early lead in the bout, showcasing his superior skills and debuting a new offensive mindset, courtesy his work with new trainer, Freddie Roach.

Little by little, though, the ever-aggressive DeMarco began to close the distance and subtly shift the momentum. Hand in hand with DeMarco’s surge was a pair of bad cuts suffered by Linares– on the bridge of the nose and over the right.

Fighting through an ugly mask of blood, Linares dropped several of the middle rounds, but was able to right the ship and stop DeMarco’s momentum until the eleventh round, when a DeMarco offensive run put Linares in bad shape and brought about the referee stoppage.

— In a significant junior welterweight bout expected to be more competitive, 23-year-old Danny Garcia beat veteran former world champ, Kendall Holt via split decision by two scores of 117-111 to counter an absurd 115-113 ruling in favor of Holt. The Boxing Tribune scored the fight 118-110 in favor of Garcia.

Holt had the goods and the ability to dismiss the younger, lesser experienced Garcia, but as has been customary in many Holt fights, he simply lacked the drive and fire to compliment his talent. In this case, he simply was unwilling and/or unable to keep pace with a hungrier opponent.