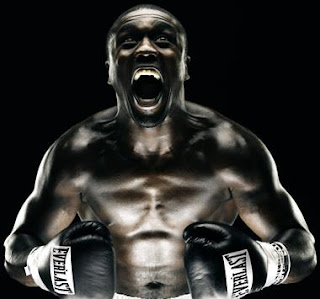 Berto struggled early with Quintana’s spoiler tactics, before utilising his God given talents to overpower the game Puerto Rican, who lost a point for rabbit punching.

After the fight, Berto stated that he had injured his left bicep in the third round, therefore forced to use his right more often. He stunned Quintana early in the eighth, then chasing him for a minute or so before a stinging right hand landed for Berto forcing referee Tommy Kimmons to stop the fight.

As discussed on our forum, Berto is definitely in the elite class of 147 pounds. But with the welterweight division, there’s also a super elite class, filled with Mayweather, Pacquiao and Mosley. Berto is better than your Quintana’s, but is he good enough to challenge with the top of the division. Some still have their doubts.

Las Vegas, Nevada – Future hall-of-famer Evander Holyfield (43-10-2, 28 KO) stopped Francois Botha (47-5-3, 28 KO) in the eighth round of their heavyweight contest on pay-per-view. Botha began well, winning the opening two rounds by manhandling Holyfield. But Holyfield got back into the fight, frequently landing counter lefts and rights in the closer third and fourth rounds. The tempo of the fight rose, with Holyfield beginning to throw combinations which eventually wore Botha down. Holyfield knocked down Botha in the eighth, but the South African beat the count. The pressure Holyfield was piling on Botha allowed referee Russell Mora to stop the contest late on in the eighth. The scores of the fight at the time of the stoppage were 67-66, 67-66 in favour of Botha, and 69-64 in favour Holyfield.

Rancho Mirage, California – David Estrada (24-6, 15 KO) impressively stopped previously undefeated Orlando Lora (26-1-1, 18 KO) via eighth round retirement. Lora was game, but Estrada was a league above, constantly landing right hands that Teddy Atlas mentioned in his ‘key to victory’. Lora didn’t win a round and was cut around both eyes at the time of the stoppage.