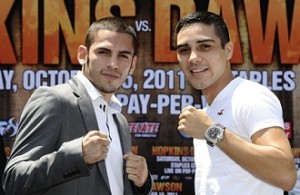 Antonio DeMarco (25-2-1, 18 KOs) and Jorge “El Nino de Oro” Linares (31-1, 20 KOs) will square off on the undercard of the Hopkins-Dawson Pay-Per-View card on Saturday October 15. The WBC lightweight title recently vacated when Humberto Soto moved up to the jr. welterweight division, will be up for grabs.

DeMarco will be making his second attempt at the WBC’s version of the lightweight title. His first shot came against the late Edwin Valero in 2010. DeMarco pressured Valero from the opening bell, forcing him to move and eat plenty of leather in the process. After 9 spirited, but one-sided rounds, Demarco’s corner stopped the fight. DeMarco has been knocking on the WBC’s door for the last two years. He held an Interim WBC lightweight title for a brief spell in 2009, and won a WBC “Silver” title in his last outing, scoring a unanimous decision victory over Reyes Sanchez to earn his shot at the vacant world title.

Linares captured a world title early in his career, when he knocked out Oscar Larios to win a vacant WBC featherweight title in his 24th fight at the tender age of 21. After one defense, Linares had another sanctioning body’s (WBA) vacant title waiting for him in the super featherweight division, a belt he was able to grab with a TKO5 victory over Whyber Garcia. After one soft touch defense, Linares was upset by Juan Carlos Salgado in Japan, losing by first-round KO. Linares has spent the last 18 months rebuilding and has notched victories over Francisco Lorenzo, Rocky Juarez, and Jesus Chavez. In his last outing, Linares knocked out club fighter Adrian Verdugo in 7 rounds.