Nothing confounds a spellchecker faster than Thai or Indian names. Which creates problems for people who want to know about the world’s most obscure champion, Pongsaklek Wonjongkam (82-3-1, 45 KOs), since just getting his name into Google, Wikipedia, or Boxrec can be a challenge in itself (hint: just Google “WBC flyweight champ”.) Anyway, Wonjongkam has been on the Ring Magazine rankings for 553 weeks, dating back to March 2, 2001. Say what you will about Ring Magazine, but 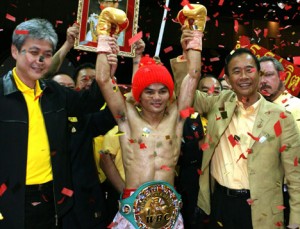 spending ten and a half years on anyone’s list of the top ten fighters at your weight class is a hell of a feat.

Wonjongkam is in action Friday night against Edgar Sosa (43-6, 26 KOs), keeping the WBC satisfied enough to keep its flyweight belt around the Thai’s waist until the next mandatory defense comes around. In the meantime, the mighty mite will pad his record against nobodies and whatever the Thai word is for “hobos.” In his last five fights, Wonjongkam has fought once to defend his world title (a unanimous decision over Japanese contender Tokuya Kogawa on July 1st) and four times against guys with a combined record of 2-8, all of whom he has knocked out.

That’s not a misprint. Four guys with records coming into their fights of 0-1, 1-2, 0-2, and 1-3 all stepped into the ring with a guy who is the Ring Magazine champion of the world, #8 on their pound-for-pound rankings (and again, I’m not holding the Ring up as arbiter of the sport here, merely making a point that Wonjongkam’s no slouch), and has held a world title for the largest part of the last eleven years. Of course Wonjongkam knocked them out.

There was a stretch in 2009 that was quite similar—at some arena in Thailand, which I like to think looks like the arena in which Jean-Claude Van Damme fought in the Street Fighter movie, the WBC flyweight champion of the world knocked out a guy who was 0-1, then beat three guys making their pro debuts, one of whom (Amir Jordan) has not been seen or heard from in a professional fight since. In the immortal words of Vince Lombardi, “What the hell’s goin’ on out here?” The pattern continues as far back as you care to look. There are fights against guys with good records and even elite fighters (Koki Kameda, last year)…and there are fights not for a title against guys who wouldn’t be second alternate for a swing fight on ESPN.

I get that anyone who fights 86 times isn’t going to give you 86 all-time classics. Back in the old days I’m sure Archie Moore and Joe Louis and Sugar Ray Robinson fought a few nobodies too. But a world champion beating up a guy with only four (or less) pro fights? At least the aforementioned all-time greats fought guys who weren’t complete strangers to a boxing ring. It is also not to Wonjongkam’s credit that he has fought only nine times outside of Thailand—once in Cambodia when he briefly traded Street Fighter for Apocalypse Now and eight times in Japan where he is 6-1-1, all against Japanese fighters for his WBC belt.

Flyweight is not a division that lends itself well to American TV audiences. Unpronounceable names stepping into a ring against each other to tongue-tie Jim Lampley definitely doesn’t lend itself well to American television. But when you’ve been in the top ten guys at flyweight and spent time in the top-ten pound-for-pound list of a major boxing publication, it doesn’t help any to be completely unheard of outside of East Asia and hardcore Western boxing fans.

So here’s the call to arms. Right now the 112-pound division has among its champions an American, Brian Viloria. The Hawaiian holds the WBO belt and has never been beaten as a full flyweight (all three of his career losses were at 108 pounds). Whatever passes for a boxing commission in Hawaii can’t be any worse than a Thai commission that allows raw, green rookies to get their brains bashed in by world champions, so give three guys with Nevada judges’ licenses and a respected referee like Steve Smoger all-expense-paid tropical vacations and put the fight on HBO so we all get to hear Emanuel Steward spend 12 rounds trying to pronounce “Pongsaklek Wonjongkam”.

In the meantime, the Thai will take care of his business tomorrow night against a “championship” opponent to keep the WBC off his ass, but then Wonjongkam will spend the next year fighting against glorified children to pad his record. And short of columnists who have made a conscious effort not to be the 10,001st person to write about Nonito Donaire (regular readers of this column know how much I loathe treading on well-worn ground), nobody is going to notice, and when they look at the boxing rankings at flyweight they will scratch their head and say “who the hell is that guy and why haven’t I heard of him outside of the boxing rankings?”

I still have to wonder, though—what are those fight nights like? Someone with a plane ticket to Bangkok, a bloodlust in his soul, and a pack of condoms (c’mon, it’s a trip to Thailand) needs to let me know.

Fox Doucette covers Friday Night Fights for The Boxing Tribune. His weekly column, The Southpaw, appears on Thursdays. Fan mail, hate mail, and Thai prostitutes can be sent to beatcap@gmail.com.