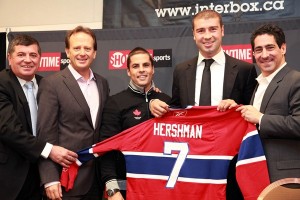 franchise with the help of Floyd Mayweather advisor, Al Haymon and a series of undeserving, overpaid fighters.

Of course, it couldn’t be that Greenburg inherited a bum product– the first generation of fighters with no exposure on free TV representing a sport increasingly isolated from the mainstream. It couldn’t be that Greenburg’s tenure coincided with the total collapse of the heavyweight division and the end of world class relevance for fighters like Roy Jones jr. and Oscar De la Hoya.

No, it was all Ross’ fault and that evil Svengali, Al Haymon. And Andre Berto! ANDRE BERTO!!!

Listen, Greenburg was no boxing genius by any stretch of the imagination and he did make several bone-headed mistakes which worked hand in hand with the overall decline of the US boxing scene, but he was hardly the grim reaper of boxing television. Greenburg’s biggest flaw was being a stiff corporate-type who could never really navigate the carnival freak show atmosphere of the boxing world.

In any case, when Showtime’s Ken Hershman was announced as Greenburg’s replacement as head of HBO Sports, the groupthink posse celebrated the idea and danced on the corpse of Greenburg’s evil empire.

It wasn’t worth mentioning that Hershman’s boxing product over at Showtime was no better at lighting the fire of public interest than HBO and that, despite some good ideas and solid match-ups over the years, only the Pacquiao-Mosley bout would generate any real mainstream interest for the network.

Efforts to make Andre Ward a bankable star have been a bust and fighters like Timothy Bradley and Chad Dawson, who are regularly targeted as proof positive of HBO’s damaged product, were first courted by and featured on Hershman’s Showtime before HBO’s deep pockets lured them away. Overall, TV ratings have deteriorated for Hershman’s boxing product at the same rate they crumbled during Greenburg’s HBO tenure.

So, forgive me if I leave the cork in the champagne and reserve my victory jig for when something really beneficial for the sport happens– like the foundation of a real governing body or a flesh eating zombie attack at a Pacquiao-Marquez free media lunch.

Actually, the addition of Hershman to the HBO machine is a little troubling to me. Not so much because he doesn’t have good ideas or a decent boxing logic, but because of his friendliness with MMA and his willingness to gamble with promotions like Strikeforce and M-1 Global.

If the stuffed shirts at HBO Corporate realize that they could do equal numbers with MMA programming for a third of the price and a tenth of the hassle, it could very well mean our sport taking somewhat of a back seat to MMA’s crew of homoerotic, chest-thumping man-boys.

HBO’s not likely to ditch boxing, but a pruning back of available dates due to a time share with MMA would not be a good thing– Especially since pay-per-view would likely be the only remaining option for boxers accustomed to making big bucks.

MMA paranoia notwithstanding, I remain ambivalent about the changes at HBO Sports/HBO Boxing until I see what’s in store. At this point, growing the sport and increasing the fan base is pure fantasy. With no mainstream exposure, the sport isn’t going anywhere but down. We could have Gatti-Ward every week and the TV ratings would be relatively unchanged. If nobody knows what’s happening, how would you expect them to be interested?

Hershman’s biggest job will be to appease the remaining fans and stop their migration to other sports that don’t routinely defy consumer demands and mock fan intelligence.

Again, Ross Greenburg didn’t kill HBO Boxing and neither did fighters like Andre Berto, Paul Williams, or Chad Dawson. In case you haven’t looked around lately, the only real draws on the American fight scene are Floyd Mayweather and Filipino, Manny Pacquiao. Other than those two, all that remains is a crew of talented fighters who don’t get much respect from the boxing media and have no real, discernible fan base. This is the sad truth. Greenburg was merely a novice veterinarian who got handed a dying sparrow. There was really not much he could do, even if he had the acumen to do it.

What really started the decline was boxing, itself. The sport’s inability to govern its dark side and unwillingness to be anything other than a confidence game made boxing toxic to network TV. Nothing is being done to correct any of this. Everybody’s just too busy lining their pockets and playing big shot. The struggling HBO product is merely a symptom of the sport’s disease.

The best we can expect from Ken Hershman is some good fights that keep the loyal fans satisfied. And who knows? If the sport behaves itself and produces a string of quality fights without WWE screw job endings, boxing just may start to get as much mainstream coverage as girls high school softball.

You can email Paul at paulmagno@theboxingtribune.com or catch him as he secretly papers the cyber world in search of acceptance and higher paying gigs. Paul is a full member of the Burger King Kids’ Club and an ordained minister in the Universal Life Church.