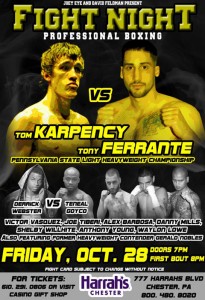 Casino in Chester.  So far they have done four successful cards featuring local fighters matched tough in competitive fights that have pleased the fans that have attended.  However, the attempt to have card number five has been difficult to say the least.

The card was supposed to go last month on September 24 as part of an outdoor show with boxing and MMA on the same card.  Unfortunately, the show could not afford a tent and the rain storm forecasted for the same night forced promoters to reschedule to this Friday October 28.

The headlining bout was to be Tony Ferrante and Tommy Karpency for the PA state light heavyweight title.  Then, just this Monday, it was announced that Karpency had pulled out.  In addition popular tough guy brawler Victor Vazquez who has headlined three of the four shows was scheduled to be on the card in a six rounder.  Vazquez’s willingness to fight and reputation for never being in a bad fight brings fans to the shows.  But due to not getting an opponent he is off the card as well.

Now Joey Eye moves on with two heavyweight bouts headlining the card.  Franklin Lawrence 16-2-2 (11 KO) who is ranked #14 by the WBC will take on veteran trial horse Raymond Ocheing 23-14-3 (18 KO).  Lawrence has knockout wins over Jason Estrada and Lance Whitaker while dropping fights to Oliver McCall by decision and Bermane Stiverne by 1st round KO in his fifth pro fight.

The co-feature will be heavyweight Gerald Nobles 26-1 (21 KO) making his return to the ring against Joseph Rabotte 11-18-1 (3 KO).  Nobles who is now forty years old has not fought since January of 2007.  Nobles most notable win is a ninth round TKO over Bruce Seldon in 2004.  Later in 2004 Nobles suffered his only defeat by fourth round DQ against former heavy weight title holder Nicolay Valuev.