Despite reports that David Haye was angling for a fight against Vitali Klitschko, it appears that Haye has instead 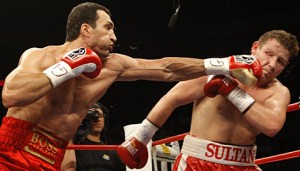 decided to retire on his 31st birthday just as he promised himself.  While many fight fans might be glad to see the brash-mouthed Haye’s boxing career go gentle into that good night, he was at minimum a fighter who brought attention to a sport and a division that badly needed it.

Meanwhile, Wladimir Klitschko has moved on to face another former cruiserweight champion in Jean-Marc Mormeck.  For his part, Mormeck is already talking the talk: the Frenchman vows to land a hard enough blow to knock Klitschko off his feet and out of the fight.

No word yet of big-brother Vitali’s return to the ring.  After dispatching Tomasz Adamek (yet another former cruiserweight) with relative ease, the 40 year old Vitali Klitschko is now targeting a March 2012 return.  Names that have been bandied about as possibilities so far include Chris Arreola, Marco Huck and Bermane Stiverne.

Speaking of Chris Arreola, word on the street (or at least the tweet) is that the number 4 ranked heavyweight in the world was who Wladimir Klitschko was targeting for his next defense rather than Mormeck.  However, Team Arreola declined the bout, so instead Arreola is likely to face someone like fringe contender Alonzo Butler next before deciding if he wants to step the ring again with a Klitschko.

The Boxing Tribune’s number 3 ranked heavyweight, Alexander Povetkin, won a rough and tumble affair against Ruslan Chagaev in his last fight which set him up to finally face a Klitschko for a world title, right?  Apparently not.  Instead Povetkin is scheduled to face Cedric Boswell on a December 3rd card alongside up-and-coming heavyweight Robert Helenius.  Hopefully the card leads to a Povetkin-Helenius showdown.  If not, the card seems like a big waste of time for everyone.  More interesting is the fact that Povetkin chose to fight the unheralded Boswell after his big win over Chagaev instead of former champion Evander Holyfield which was called all but a sure thing as recently as two weeks ago.

Former title challenger and number 4 ranked contender Eddie Chambers was forced to withdraw from a planned showdown with friend and fellow former Klitschko challenger, Tony Thompson, due to an injury he sustained to his back.  As anyone who has had back problems in the past knows, that kind of injury isn’t just something you rush back from.  Still, Chambers says he hopes to be back in the ring by the end of the year.

Prospect Seth Mitchell is scheduled to appear on the undercard of the Amir Khan vs. Lamont Peterson December 10th battle on HBO Boxing.  Mitchell will face Timur Ibragimov.  Mitchell is by all accounts an exciting young heavyweight many in the industry tab as a possible future champion.  Alongside fellow American Deontay Wilder, Mitchell represents America’s best hope at future heavyweight glory.

Finally, I recently found out fellow boxing writer Lyle Fitzsimmons doesn’t believe former heavyweight champion “Smokin” Joe Frazier deserves to be in the International Boxing Hall of Fame.  That’s absolutely ludicrous.  Not only was Frazier one of the best fighters of his era, he is also clearly one of the best heavyweights of all-time.  Frazier fought and beat Muhammad Ali in the first of their three epic fights, a win that is all too often overlooked.  Moreover, there are only two men to ever score wins against Joe, Ali and George Foreman.  Hopefully, Fitzsimmons doesn’t get a vote because obviously he should not have one if he does.