To the surprise of absolutely nobody, the Hopkins-Dawson PPV was a complete disaster financially. Kevin Iole reported via Twitter that the fight did 40,000 buys, and Dan Rafael tweeted that it was “less than 100,000”. Of course this is the 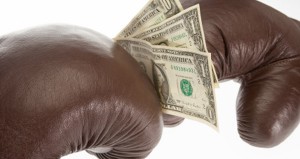 case—Chad Dawson couldn’t draw flies if you covered him in shit and Hopkins, beloved though he may be among old men and hardcore fans of defensive fighters, isn’t exactly Manny Pacquiao. Notwithstanding the foregoing (as the lawyers say), I’m not going to be the 95,000th boxing writer to pile on about this. That event was what we expected it to be, a great episode of FNF or ShoBox (the undercard) with a championship fight bolted onto it in a failed attempt to make it a $50 draw.

The greater point at issue here is twofold. One, why not make all boxing matches pay-per-view if all you care about is revenue maximization (40,000 buys at $50 a pop is still two million bucks) or, if you realize that option one is preposterous because it does absolutely nothing to bring in new fans, what truly is a pay-per-view draw and what does boxing have to do to make itself profitable the way other “real” sports are profitable? Thankfully, your friendly neighborhood commentator is a semester and a half away from a business degree. Let’s do a little science, shall we?

As mentioned in my first point, 40,000 buys of a $50 event is two million bucks. The trouble is, I’m not convinced that $2 million is anywhere near the cost of putting on a major event at a sports arena. Between the site fee and the employees and the logistics and the cable companies getting their cut and all the “other stuff”, there’s no way they even broke square on this one. Not only that, but any investment has a “required rate of return” to get people to buy into it in the first place—basically, “if I give you $100 you’d damn well better be giving me back my money with interest or it’s not worth my time or effort.” We all understand this instinctively (and if you don’t, I’d like to make a deal with you. I’ll give you a great rate, you’ll love it.)

But two million dollars direct from the customer is greater than no dollars at all, which is what it’d bring in if you aired it either on free TV or simply as part of a cable customer’s subscription. I don’t have handy the number of people who have HBO or Showtime strictly for their boxing events or even with boxing as a significant part of the draw, but outside of hardcore fight fans, professional boxing writers, and the occasional guy trying to strong-arm his wife, I’d bet more people have the channel for stuff like Game of Thrones or Bill Maher’s show or whatever movies HBO happens to broadcast. I don’t have HBO’s own marketing data handy, but it’s hard to believe that their subscription revenue would pay for even the $2 million they got from running it as a pay-per-view instead.

So what if we used the ordinary broadcast revenues for a TV series on basic cable or (perish the thought) free TV? After all, no small few boxing commentators have been calling for exactly this ever since the networks finally gave up the ghost on showing live boxing (the last fight I remember watching on ABC was probably 1985 or ’86 or so, when I was a little kid). ESPN2 pulls an average of 500,000 viewers for Friday Night Fights, about par for the course for the network’s Friday night sports programming (and roughly on the same level as any NBA telecast on Friday night not involving the Celtics, Lakers, Knicks, or Heat).

Mind you, trying to find ad costs without being an actual company trying to buy an ad is very needle-in-haystack, but if we scale the cost of an ad for the NBA Finals ($1 million according to most places I Googled) down by the audience size for a Friday night hoops contest (about 1/20 of the audience in the regular season, comparable to FNF’s weekly audience for boxing), that runs about $50,000 per commercial. That puts the overall ad revenue for a 2-hour night of boxing (2 spots between rounds plus studio show advertising and “miscellaneous”) at…something higher than $2 million when it’s all added up! Long and the short of it, Hopkins-Dawson would’ve made more money on ESPN than it did on pay-per-view.

And that’s cable. Imagine if ABC got back into the game, airing boxing matches between mid- to upper-level fighters and using their internal hype machine (part of the ESPN global brand) to pimp out Saturday afternoon fights. You still have to consider the rights fees and opportunity costs of losing out on broadcasting something else (forget the “toxic to advertisers” angle because beer companies and any company looking to target America’s growing Hispanic population thinks “el boxeo” is a cash cow second only to soccer, and they’re right), but this is at least as much of a money-making opportunity as is regular-season basketball (which, oh by the way, is locked out), probably comparable to Major League Soccer, and a very viable alternative to having nothing at all and forcing local affiliates to play something like the Z-Grade movie of the week.

I’ll say this again just to hammer the point home—Bernard Hopkins and Chad Dawson would have made more money on ABC or ESPN than they did from a pay-per-view. There’s a big difference between a Pacquiao or Mayweather fight (with over a million buys and high-eight, low-nine-figure revenue totals) and two guys who couldn’t draw ants if they threw a picnic.

The bottom line is this—promoters like money. TV networks like money. Boxers and trainers and cut men and peanut vendors and the guy at the will-call window dealing with some pissant blogger getting onto press row, they all like money. And one thing they teach you in business school is that price times quantity equals revenue and revenue maximizes according to mathematical functions. Whatever the revenue curve was for Hopkins-Dawson, I find it hard to believe that $2 million was the theoretical or even practical maximum. I don’t believe that any more than I believe the Boxing Tribune would make any money in the long run by charging our readers $50 every time they wanted to read the latest edition of The Southpaw.

There is one silver lining to all of this, though. Rather than heralding “boxing is dead” (which it isn’t—as long as there are guys willing to beat the crap out of each other for money, there will always be someone to watch them do so and pay for the privilege, and that’s been true ever since dudes beat each other senseless every four years in ancient Athens and someone coughed up some drachmas to get into the arena), it is the kick in the pants that boxing needs to evaluate its revenue model in order to either reach the most customers for ad revenue or set a price that will let those customers pay them the most money directly.

I come not to bury Caesar, but to praise him; maybe I’m clinically insane to think so but I think there’s hope yet for this sport even in the wake of failure.

Fox Doucette covers Friday Night Fights for The Boxing Tribune. His weekly column, The Southpaw, appears on Thursdays. Fan mail, hate mail, and $50 donations for the Southpaw PPV can be sent to beatcap@gmail.com.