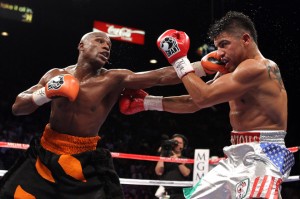 Ortiz Star Power pay-per-view generated 1.25 million buys and $78.44 million in gross revenue, making it the second-highest non-heavyweight money maker in PPV history. For the record, Mayweather now holds the distinction of having participated in the three highest revenue non-heavyweight PPV events in boxing history (vs. Oscar De la Hoya, vs. Ortiz, and vs. Shane Mosley).

The 1.25 million number falls shy of Golden Boy CEO, Richard Schaefer’s projection of 1.5 million buys. It also comes in slightly below the 1.3 million buys of May’s Manny Pacquiao-Shane Mosley event, which sold about 50,000 more shows, but generated less money because of a lower sales price ($5 less than the asking price for Mayweather-Ortiz).

For the bout, Victor Ortiz earned $2.5 million for his TKO 4 loss while Mayweather walked away with $25 million plus an undisclosed piece of the PPV revenue.

The six-week delay in revealing the buy rate is thought to be the result of Mayweather’s now-resolved issues with the IRS and a desire to square away old business with the government agency before releasing any new revenue information for the fighter.

The delay allowed for much speculation and disinformation from members of the boxing media, who low-balled the sales figures with posted estimates ranging from 850,000 to 1.15 million.

As for the legitimacy of the 1.25 million figure, one must be reminded that HBO Boxing/HBO PPV is a subsidiary of Time Warner, which has to report to a Board of Directors as well as its shareholders. False reporting of sales information is considered a federal crime and one taken very seriously by the U.S. Government. Needless to say, officially announced HBO PPV numbers, more so than anything else in boxing, can be considered trustworthy.