Former 3-division champion James “Lights Out” Toney (73-6-3, 44 KOs) will travel to Russia, to take on top-rated cruiserweight contender Denis Lebedev (22-1, 17 KOs), on Friday, November 4. This 12-round cruiserweight bout will take place at the Khodynka Ice Palace in Moscow. 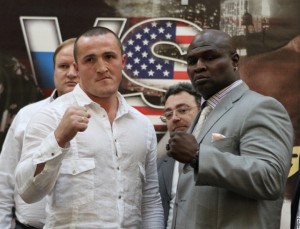 Lebedev challenged WBO cruiserweight titlist Marco Huck last December, losing a split decision in the process. The hard-hitting southpaw has fought all but three of his bouts in his native Russia. In his last bout, which took place in May, Lebedev knocked out a badly faded Roy Jones Jr. with 2 seconds remaining in the tenth and final round.

Toney, the former middleweight, super middleweight, and cruiserweight champion has slimmed down and will be making his first appearance as a cruiserweight since his thrilling war with Vassiliy Jirov in 2003. As a heavyweight, Toney defeated Evander Holyfield, Dominick Guinn, and Fres Oquendo, and had 2 victories over former champions Hasim Rahman and John Ruiz overturned to no contests (error in ruling and positive test for a banned substance respectively). Toney weighed in at a career high 257 pounds in February, but weighed in (unofficially) as low as 217 pounds as recently as August.