On-air, off-air, and up in the air, Saturday night’s battle on Showtime between Lucian 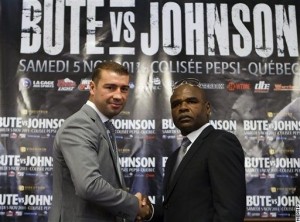 Bute (29-0, 24 KOs) and Glen Johnson (51-15-2, 35 KOs), Bute’s ninth defense of his IBF super middleweight championship, promises to be a good action fight. The televised co-feature will bring prospect Pier Olivier Cote (17-0, 11 KOs) as he takes on Jorge Luis Teron (25-2-1, 17 KOs) in the first 12-round fight of his career (for a minor belt in the IBF hierarchy.) Off-air, noted French-Canadian fighters and Bute undercard staples Sebastien Gauthier and Sebastien Demers are in action, and undefeated Cuban prospect Rances Barthelemy rounds out the list of names that should be fairly familiar to American audiences. Without further ado, a complete breakdown of the off-air and on-air fights you the informed fan want to know about:

Yuriorkis Gamboa, Guillermo Rigondeaux, Yudel Jhonson, and Yordanis Despaigne may get all the press among the recent crop of Cuban defectors tearing up the professional ranks, but Rances Barthelemy has quietly gone about compiling an unbeaten record as a prospect in his own right, mowing down hobos and tomato cans as he builds his record and hones his skills in the Free World. While it hasn’t got him much in the way of TV exposure or title considerations, it has built up an impressive-looking record for when those moments come his way down the line.

Luis Ernesto Jose, despite having been planted on the canvas like a seed in a garden seven times in his career (most notably by Lucas Matthysse in 2009), is probably the biggest test of Barthelemy’s career so far, which says more about the Cuban than it says against his Dominican designated fall guy in this off-air fight. Jose has a bunch of wins against guys with either wide losing records (including an 0-20 fighter he knocked out in one round) or with almost no pro experience. Barthelemy is neither of those things. This should, if Barthelemy is the hard hitting prospect he believes himself to be, be a very short night; the question is not who will win but how many rounds it will take. A win by Jose will make a very serious dent in Rances Barthelemy’s professional credibility.

Sebastien Demers, best known to American audiences for getting pasted by Brian Vera on the undercard of the David Lemieux-Elvin Ayala fight in June of 2010, faces a do-or-die fight for his career against Allan Green, who is trying to resurrect his own career after sleepwalking through a shutout decision loss to Andre Ward last June and getting his brains turned to pudding by Glen Johnson last November.

In addition to the televised beatdown by Vera, Demers got ses cerveaux bashed in by Renan St. Juste at Bell Centre in December of 2010 for a minor WBO belt. Against a guy like Allan Green, who has a fair bit of punching power, Demers needs to make sure he doesn’t get sent to a third straight case of asking his trainer “ou est moi?” (as in “where am I?”) after the referee reaches the count of ten.

Both men have fought championship contenders, but Green’s resumé is a bit deeper than is that of Demers. Fighting Andre Ward and Glen Johnson, even in defeat, and going the distance with the former, suggests a certain durability and potential championship pedigree; indeed, getting into Super Six in the first place is testament to the fact that Allan Green can fight. Then again, Green’s other loss was to Edison Miranda, who has proven in the meantime to be a B+ level fighter on his best day, which may establish Green’s own level. At any rate, this fight is way too good to be off-air and Showtime is missing out by not elevating it to co-feature status or starting the broadcast early enough to get three fights in.

Winning 21 professional boxing matches, even against very limited competition, is a good thing. Getting one’s brains scrambled twice by journeymen then moving up in weight to challenge a guy who until very recently held a world title at that higher weight class? That’s not such a good thing. But it is exactly the situation that Saint-Jerome, Quebec native Sebastien Gauthier finds himself in as part of the off-air undercard, as he faces Steve Molitor, who is 8-2 with 3 KOs when fighting for the IBF belt at 122 and has come in as heavy as 127 ½ pounds during his career. Gauthier, who has fought the majority of his fights at bantamweight, is the naturally smaller man here.

As mentioned, both of Gauthier’s losses have been by knockout, once to Mario Macias (14-4 at the time of the fight in 2008) and the other time to Eduardo Garcia (16-5, although Garcia had just moved up from 115 where he had fought for a world title.) None of his wins have come against fighters with fewer than two losses (the guy was 0-2) and there are a lot of barely-over-.500 fighters on the list. Molitor is by far the toughest test of Gauthier’s career thus far, and he is a better fighter than both men who have knocked the Quebecois fighter out.

Molitor may very well have more to prove here than does Gauthier; it will not look good for the former champion if he loses here. For Gauthier, it is a chance to prove that he is something other than a club fighter.

Beating up Michael Lozada does not necessarily establish anything about a fighter. Beating up Lozada when he shows up over the junior middleweight limit for a welterweight fight and doing so in one round, all while critics suggest that you’ve been in against soft competition and might not be all you’re cracked up to be? That would be “making a statement”. Cote earned his way into the co-feature on Showtime largely on the back of that win (and because the Robert Stieglitz-Mikkel Kessler fight originally intended to be the co-feature via Denmark fell through.) He faces fellow Lozada vanquisher and prospect Jorge Luis Teron for a minor belt sufficient to push the distance of this fight to twelve rounds.

Teron, for his part, is probably best known as a victim of Brandon Rios, who knocked him out in two rounds in February of 2010. Besides Lozada, Teron has no other major victories on his resumé and has as a mark against him a draw against a 21-24-1 fighter (Armando Cordoba) and a loss to a 24-10 fighter (Aldo Valtierra). Whether he is a prospect or just a club fighter and journeyman in waiting may very well be settled in Quebec.

Record-wise, Teron is a step up for Cote. Skill-wise? That’s debatable. The co-feature will showcase a new prospect at junior welterweight, but make no mistake—neither of these guys are Amir Khan…at least not yet in Cote’s case.

Your friendly neighborhood commentator has devoted plenty of column inches to the pride of Romania (see “The Case for Lucian Bute” and “Of Course I’m Biased, I’m a Fan” on this site, plus Bute’s place in the FOX Sports/Boxing Tribune top ten pound-for-pound rankings). Bute has dispatched every opponent put in front of him, and of his nine fights for the IBF belt he now holds, all but one have ended with Le Tombeur’s opponent separated from his senses. Yes, the “but one” was a rather big exception as Bute was knocked out by Librado Andrade, or at least everyone but long-count referee Marlon Wright thought so as Wright gave Bute a total of 23 seconds to get up. Bute did, however, smash Andrade in the rematch, winning by fourth-round KO and fighting throughout like all the Mexican did in their previous fight was make Bute angry. Bute’s win over Jesse Brinkley last year was the kind of brutalization that became all the more evident when Brinkley, fighting in his own backyard, got the crap beaten out of him by Peter Quillin and looks like a guy who got flat-out broken in that title fight.

Meanwhile, Glen Johnson’s career is best summed up by an immortal line from the Grateful Dead: “What a long, strange trip it’s been.” Once a world titlist (briefly holding the IBF light heavyweight title in 2004 and defending it against Roy Jones Jr., marking the beginning of Roy’s decline as a fighter), Johnson’s overall record for major world title belts is 2-6-1. Against undefeated fighters, Johnson is 2-4-1, having lost his last three against Tavoris Cloud, and twice to Chad Dawson. The last unbeaten fighter Johnson vanquished was 20-0 Thomas Ulrich way back in 2001. Johnson is your classic “just good enough to beat all but the best” kind of fighter. His biggest win, besides Roy Jones, was an 8th-round KO of Allan Green last year as part of Super Six. Lucian Bute is exactly the sort of fighter that has historically beaten Glen Johnson very soundly.

Glen Johnson is, however, very, very durable; the only man to stop him in the ring was Bernard Hopkins when B-Hop was at the height of his powers as middleweight champion in 1997. However, Johnson is 42 years old and has 68 fights and 464 rounds as a professional on his odometer. Will his durability hold up or is this going to be the kind of “my gods, he needs to retire” beatdown that makes the fans’ stomachs turn a little even as they cheer the violence they have just witnessed?

Lucian Bute may not get his shot against the Andre Ward-Carl Froch winner, but this is the second of three fights the Romanian has been signed to show on Showtime. It seems implausible that the network wouldn’t want the third fight to be its biggest, and there could be no bigger draw than a fight that would surely crown an undisputed champion in boxing’s deepest division. Bute needs to make sure he doesn’t look past Glen Johnson, who could take ruthless advantage in that case.

The latter two fights (Cote-Teron and Bute-Johnson), 12 rounds apiece, air on Showtime in the US at 9 PM Eastern and Pacific (West Coast viewers will have to use either an East Coast satellite feed or watch the bout on tape delay) and will very likely run into HBO’s Boxing After Dark show that starts at 10:15. Viewers are advised to use two televisions. At press time, it appears that European viewers will have to find an Internet stream for a fight that will be in the wee hours of Sunday morning European time.

Fox Doucette covers Friday Night Fights for The Boxing Tribune. His weekly column, The Southpaw, appears on Thursdays. Follow Fox on Twitter @RealFoxD. Fan mail, hate mail, and the recipe for Montreal Restaurant Bonaparte’s duck a l’orange can be sent to beatcap@gmail.com.