Riddle me this, Batman. If I stood at the door of a nursing home and told you that for $50 you could get a seat to watch a Russian guy beat the ever loving crap out of the old folks therein housed, you’d have me and the Russian both arrested, right? Beating up helpless senior citizens, no matter how 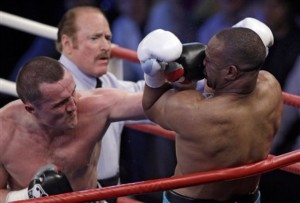 badass some of those guys might have been when they were younger, is just plain wrong, correct?

Then how is it that Denis Lebedev (22-1, 17 KOs), who might very well be forgiven for beating the stuffing out of Roy Jones as some sort of object lesson to the latter to get out of the fight game before he ends up like Muhammad Ali, is stepping into the ring against James Toney (73-6-3, 44 KOs), a guy so old that he made his pro debut when Margaret Thatcher was still the bloody Prime Minister of England, Tony LaRussa had yet to claim his first World Series title as manager of the Oakland A’s, and The Simpsons hadn’t even aired its first episode yet?

Make no mistake about it—James Toney has no business anywhere near a real contender at any weight class anymore. Sure, he clobbered Damon Reed in his last fight, beating him soundly by shutout unanimous decision, but Damon Reed is exactly the sort of fighter who couldn’t beat an over-the-hill fat guy. Toney weighed in at 257 pounds for that fight and looked more like Grimace from the McDonald’s ads than like a professional fighter. Toney hasn’t been a cruiserweight since 2003 and before he won the IBF belt from Vassiliy Jirov in that 2003 fight, he hadn’t been a champion at any weight since capturing the IBF super middleweight crown from Charles Williams in 1994 (which he then surrendered in his very next fight to Roy Jones Jr.)

Denis Lebedev, for his part, who ought to take the ring nickname “The Geritol Killer” after this fight, has beaten a curriculum vitae that can be best described as “Roy Jones and the Europeans” (to steal a line from Dave Barry, a good name for a rock band.) The only real, honest-to-gods champion he has faced, Marco Huck, won a split decision from the Russian last December.

The WBA, always eager for a few bucks, has decided to make this fight for a belt at the 200-pound limit. What James Toney has done to earn a title shot is beyond me, but then again beating Roy Jones senseless isn’t exactly a shining endorsement for a title shot either.

Speaking of titles, Lebedev has some weird ones on his resumé. Besides the WBO Inter-Continental (read: Euro) cruiserweight belt, which he earned by virtue of beating guys like Enzo Maccarinelli, Ali Ismailov, and Ignacio Esparza (respectable fringe contenders all), he also twice held the “Russia light heavyweight title” (this according to Boxrec), and in two of those “championship” fights he took on guys with records of 4-13 and 1-5. Beating up gulag prisoners and Ivan Drago’s sparring partners is apparently ample preparation for fighting guys so old that you could play the music from Rocky IV over their training sessions and it’d look just like it did when they saw that film in the theater.

I’m kind of wondering who Denis Lebedev plans to fight next. I hear there are some really viable guys available, like Dwight Muhammad Qawi, Michael Spinks, Matthew Saad Muhammad, and once he gets through with Floyd Mayweather I’m sure Larry Merchant wouldn’t mind a shot at Lebedev too. C’mon, tovarisch. One over-the-hill fighter to get your confidence back after you arguably got robbed by Marco Huck in Huck’s backyard is one thing. Two over-the-hill fighters in your backyard is quite another, and it calls into question your ability to fight real competition. If you pick a guy like Antonio Tarver and fight him in Russia, then we’re really going to have some questions for you to answer. We’ll have to keep you out of Canastota for fear that you’ll beat up the other Hall of Fame inductees.

So who should Lebedev fight? Steve Cunningham, Yoan Pablo Hernandez, maybe even a rematch with Marco Huck. But the parade of fortysomethings? Not kosher.

Fox Doucette covers Friday Night Fights for The Boxing Tribune. His weekly column, The Southpaw, appears on Thursdays. He’s going to look really stupid if James Toney wins this fight. Fan mail, hate mail, and offers to promote Lebedev vs. Your Grandfather can be sent to beatcap@gmail.com.