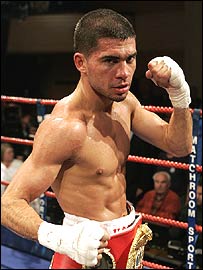 November 5th on Showtime.  The fight will take place in Quebec City, Canada and coverage begins at 9pm ET/PT.

A 31-year-old southpaw, Molitor is ranked 6th among Junior Featherweights and has held the IBF title belt twice in his career.  Molitor most recently lost the belt to Takalani Ndlovu, a fighter whom he had beaten convincingly twice before.  Despite this setback, Molitor is making plans to face the highly ranked action fighter Jorge Arce, making this fight a stepping stone in his journey back to the top.

Fellow Canadian, Gauthier, is an orthodox fighter looking to make a name for himself.  He believes the bout couldn’t come at a better time in his career, and he’s hoping a win over Molitor will put his boxing career into overdrive.

This bout takes place on the undercard of Showtime’s main event where Lucian Bute will make his 9th title defense against Glen Johnson.