All eyes will be on Alfredo Angulo and James Kirkland in Cancun Saturday night, but the 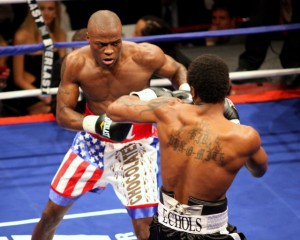 undercard battle is not to be missed; it features undefeated rising super middleweight prospect Peter Quillin (25-0, 19 KOs) doing battle with Scotland’s Craig McEwan (19-1, 10 KOs) as Quillin continues his quest to join the ranks of the contenders in boxing’s deepest division.

Quillin has yet to truly be tested thus far; his signature win was over a faded Jesse Brinkley in Brinkley’s backyard of Reno in April of this year. Brinkley, an alumnus of The Contender reality series, looked in that fight like Lucian Bute had beaten the fight out of him in his last battle (a 9th round TKO that was over by the fifth) and looked every one of his 34 years in the ring. Take nothing away from Quillin, who only required three rounds to do what took the Canadian champion nine, but there is a very real sense that “Kid Chocolate” was beating up a guy who was more like DeMarcus Corley in his fight with Thomas Dulorme than a guy who had just fought for a world title.

Craig McEwan may or may not qualify as a test. Yes, he is a one-loss fighter, but the one loss was in his last fight to fringe middleweight Andy Lee by tenth-round TKO. McEwan, who will be at the heaviest weight of his career Saturday, has no signature wins and looks to be severely overmatched against Peter Quillin. This is a showcase fight for the undefeated combatant, nothing more. A McEwan win would be a very big upset indeed.

This fight airs as part of the Angulo-Kirkland telecast, part of HBO’s Boxing After Dark series, and will be Saturday night, November 5, at 10:15 PM Eastern/7:15 Pacific. Viewers in the UK can watch the fights at 10:00 AM local time Sunday on Sky Sports 4.