Both men opened the fight touching each other to the body early and often. With Johnson flicking and pawing with his jab, Bute stood outside of range and 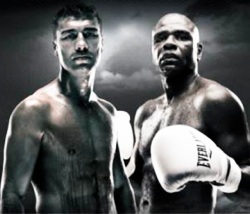 picked his shots. Bute put an exclamation point on the round with 2 flashy left hands in the last 30 seconds.

Bute opened up briefly in round 5, picking up his pace and moving in closer to convince Johnson to open up offensively. Over the next few rounds, Bute fought a measured pace while he controlled the center of the ring and hit Johnson with straight left hands, short right hooks, and the occasional sweeping left uppercut to the body that has become his best weapon.

Johnson, despite being outclassed, never backed down as Bute moved in range and elected to stand and trade. In the end, judge Pasquale Procopio scored the fight 119-109, and judges Benoit Roussell and Jerry Roth both turned in scores of 120-108. The Boxing Tribune scored the bout a shutout, 120-108 in favor of the champion.

On the undercard, junior featherweight prospect Peir-Olivier Cote (18-0, 12 KOs) destroyed Jorge Teron (25-3-1, 17 KOs), dropping him twice in the 2nd round. The end came with 33 seconds remaining in the round.