Over the months, the Monday Rant has become a sounding board for attacks on some of boxing’s ugliest 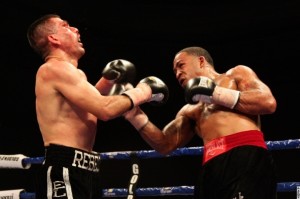 aspects– from the rotten, greedy sanctioning bodies right down to the sleazy boxing scribes who act as publicists for “friendly” promoters and managers.

But I’m often guilty of glancing over some of the great stuff that happens in the sport every so often. These shining moments explain why, through all the grift and pandering, I live and breathe boxing.

As I stated previously (and to slightly alter a Bill Clinton quote): There is nothing wrong with boxing that cannot be cured by what is right with boxing.

During a big boxing weekend, there was plenty wrong to single out:

— James Toney, an idol of anyone who truly loves and respects the actual art of prize fighting, culminated eight years of binge eating and self-denial with an utterly embarrassing performance against Denis Lebedev.

— Lucian Bute absolutely dominated one of the sport’s most endearing figures, Glen Johnson. It was The Road Warrior’s second straight loss at the elite level and a sign that, no matter how hard we wish it not to be true, his days as a real challenger are done.

— Peter Quillin-Craig McEwan was a solid fight, but tainted with a very early stoppage. “Kid Chocolate” probably would have gone on to win anyway, but he deserved a chance to close the show the right way in his HBO debut and McEwan deserved a chance to take Quillin into deep waters.

— Guillermo Jones made only the second defense of his WBA cruiserweight title since winning the belt in 2008– against a guy in Michael Marrone, who has never even fought at cruiserweight! How Jones gets away with keeping the belt is beyond explanation.

However, the slate was wiped clean and any bad tastes left in the mouth, washed away with the crazy-thrilling first round of the James Kirkland-Alfredo Angulo war Saturday night in Cancun.

For those who didn’t get a chance to see the fight yet, there are plenty of videos floating around on YouTube and Facebook or you can read the recap from The Boxing Tribune.

The rest of the bout, while infinitely compelling and entertaining, was really not Fight of the Year quality. Angulo never got his legs under him after that brutal first round and was fighting an uphill battle on pure heart and determination. From the second round on, there was little doubt that Kirkland was going to finish “El Perro” at some point, but it didn’t really matter.

Those first three minutes were so good that we really didn’t need much more.

Boxing fans aren’t really hard to please. Give us three outstanding minutes and we’re happy. One hundred and eighty seconds of true effort and awe-inspiring grit negates a three-day weekend full of mediocre and/or marginal action. Look at the energized fans on social media sites and message boards if you don’t think fights like Kirkland-Angulo erase a lot of the negativity the sport has generated recently.

Imagine if boxing could ditch the politics and self-defeating business practices to deliver a truly great fight each and every week. Now, stretch your imagination even further and visualize a sport that could somehow share these magical moments with the mainstream public who has never and will never be exposed to boxing without going on a cable quest to find it.

If you’re this far into the Monday Rant, you must be a fan…or, as is the case with those loyal to the old school of boxing journalism, someone who loves to hate me.

Whatever the case, The Boxing Tribune is starting a new weekly feature, Friendly Fire, aimed at giving true fans of the sport a public forum to share their thoughts with the world.

No topics are off-limit, no opinions are off the table. If you’d like to contribute a 400+ word column for our Friendly Fire feature, send it to me via email at: paulmagno@theboxingtribune.com. If you’d like to query first, looking for more info, you can send me a message through the same address.

So, if you’re a fan or a fighter with something on your chest, say it on the sport’s only truly independent boxing site.
*******************
Also, The Boxing Tribune is always looking for full-time staff members. Aside from a small (but growing) profit share program, we can also offer you mainstream exposure through our affiliation with Fox Sports.

We’re looking for free-thinking, hard-hitting, hardcore fight writers with a burning desire to tell the whole truth with little regard to burning bridges or pushing agendas.

Shills, wannabe celebrities, and social climbers need not apply. Must be fearless, have strong writing skills, and a real understanding of the sport.

You can email Paul at paulmagno@theboxingtribune.com or catch him as he hurts the feelings of self-important boxing scribes everywhere. Paul is a full member of the Burger King Kids’ Club and an ordained minister in the Universal Life Church.