My first memory of boxing as a small child was watching replays of old heavyweight battles.  The standard 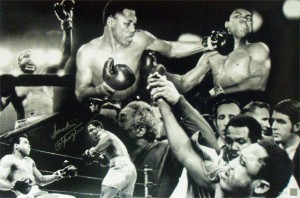 list of great fights and fighters from Dempsey to Louis to Ali were all familiar, but for whatever reason, there was only one that brought out a certain emotional connection that I never could quite describe; one man that more than anything else is the reason I love boxing.  That man was Joe Frazier.

It hurts me to have to start using “was” to describe Smokin’ Joe.  For those who havent heard the former heavyweight champion died on November 7th, surrounded by his family.  While it had been in the news for days that Joe was on his last legs, his death still came as a shock to many who just refused to believe that the great warrior could ever truly be put down for the count.  Reports as late as earlier on the 7th indicated that doctors hadn’t told Joe he was dying, and who could blame them?  Telling Joe Frazier what he could or couldn’t accomplish was never a safe bet.

The greatest boxer from one of the great boxing cities, Joe was the epitome of the Philadephia fighter.  Come forward, apply pressure, endure all pain, do whatever it takes to land that monumental left hook.  When that punch landed on Muhammad Ali in the two men’s first epic battle, the entire world felt it.

While Joe’s victory in that fight (perhaps the biggest event in boxing history) secured his hall of fame legacy, it was the third battle between the two great heavyweight warriors that seemed to weigh on his mind well after his career was over.  In “The Thrilla in Manilla” Smokin’ Joe was stopped on his stool by his corner before the 15th round, due to the fact that well, he was unable to see.  A minor detail in the mind of Frazier, who many times in the years later stated he never forgave the men who stopped that fight, and that had he been allowed to fight blind, he would have scored a last round knockout.  Even the brash Ali could hardly disagree, stating after the fight that he felt as close to death as he could possibly imagine.

He also never forgave Ali for the merciless taunting that “The Greatest” forced him to endure over the course of their careers.  Muhammed insists it was all in good fun.  Joe was not the kind of guy to treat the fight game as “good fun.”  Many may cringe at Frazier’s statements about Ali “deserving” Parkinson’s disease, and wishing he had been at the Olympic torch lighting cerimony where Ali was the guest of honor, but only so he could have pushed him into the flame.   However what you have to understand is that Joe felt he was robbed of the thing most important to him, his right to go down fighting, and to do so with dignity.

In the end boxing, like life, is not a fairy tale.  Regardless of what Joe Frazier deserved, reality gave him something else.  Mistaking him for purely bitter would be understandable, but it is also missing the point.  His refusal to accept defeat was what made him a great fighter, and unfortunatly also what caused him to be haunted by that epic fight for the rest of his life.

Sometimes maybe in the world of sportswriting we get a little too philosophical, a little to eager to make things bigger than they are, but in this case, I could care less.  I’m going to go ahead and imagine Joe setting up a ring outside the pearly gates, waiting for Muhammad to join him.  In Joe Frazier’s heaven, it’s that 15th round for all eternity, and nobody but the two fighters has the power to stop it.