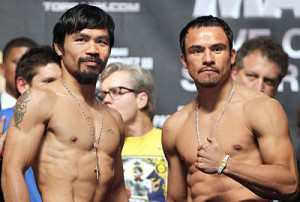 Saturday, November 12th, for the WBO welterweight title, Manny Pacquiao (53-3-2, 38 KOs) defends against Juan Manuel Marquez (53-5-1, 39 KOs) in the third meeting between the two fighters. In their 2004 first bout at the featherweight limit, Marquez would survive three first round knockdowns to score a draw. Four years later, at super featherweight, Pacquiao would take a close, controversial split decision.

Stay tuned to The Boxing Tribune for full coverage of the full pay-per-view card.