Saturday night’s Pacquiao-Marquez fight was and wasn’t a robbery.

In the strictest sense of the word, it could be classified as a robbery since the guy who actually won the fight didn’t get his hand raised.

I’m not one of those people who believes that a challenger has to take the title from the champ. One point is enough for a title change in my books and, since my personal scorecard read 115-113 for 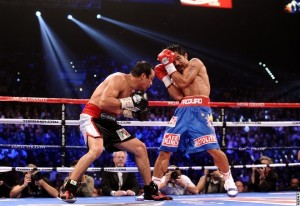 Marquez, I felt that Juan Manuel should’ve left the MGM Grand with the belt and the satisfaction of having avenged similarly close, widely disputed decisions in 2004 and 2008.

However, what happened at the MGM Grand certainly can’t be classified as a robbery in the Paul Williams-Erislandy Lara sense of the word. It was just a case of the money fighter, pop culture icon, and beloved Mr. Everything getting the benefit of the doubt whenever it was possible to give him that benefit.

Realistically, eight of the twelve rounds could’ve gone either way. The fight was that close.

Those that argue that Marquez should’ve pumped up the offense or that trainer, Nacho Beristain should’ve advised his fighter to let loose and be more aggressive are missing a major point. Marquez was as effective as he was because he controlled the pace of the bout and refused to fight the fight at Pacquiao’s usual frenetic pace. A more aggressive Marquez, who is by nature a controlled counter-puncher, would’ve played into Pacquiao’s strengths.

Of course, this controlled, steady pace opened up the distinct possibility that, short of an absolutely stellar set of judges with balls the size of snow tires, Marquez would likely come up short in yet another close contest.

Beristain and Marquez rolled the dice, betting on the fact that they wouldn’t, couldn’t get shortchanged again. But like just about everyone else who ever bet on a sense of fair play in boxing, they lost.

With HBO and the media forcing the world to bow at the altar of Pacquiao hero worship, it should come as no surprise that the eyes of the judges would be transfixed on the Filipino’s every movement and that they would give him credit for anything and everything even remotely close to a score.

Marquez wasn’t a 9-1 underdog because he was so much worse than Pacquiao, he was the underdog because it was going to be so hard for him to beat the media darling and Top Rank cash cow. Only a knockout or a completely dominant performance was going to wrest the victory from the clutches of Bob Arum’s walking wallet.

Why does anyone find it shocking that the money fighter and the promoter’s star attraction would get the nod in a close fight? This is nothing different than what we usually see in the sport. Most of us who’ve been around the block have seen this happen dozens, if not hundreds, of times.

It was so common knowledge that it could’ve been printed on a disclaimer at the bottom of the official fight poster– Pacquiao ain’t losing unless something truly crazy happens.

Here’s a couple of questions for you:

Why would a judge give the losing fighter a round late in the fight that he most definitely didn’t win? What caused judge, Glenn Trowbridge to give an obvious Pacquiao round to Marquez after spending the entire fight giving Pacquiao every benefit of the doubt?

For those who have served as a boxing judge at any level, the answer has likely popped into your head.

Going into the twelfth round, Trowbridge had the fight scored eight rounds to three. The thought of scoring such a close fight in such a lopsided manner looks bad. Really bad.

So, here’s what appears to have happened.

Trowbridge realized the scores he had turned in. To make his scorecard a more plausible 116-112, rather than the 117-111 he was headed for, he was going to give Marquez that last round no matter what. After all, it was a meaningless round on his card.

But if Trowbridge did do this for the reasons mentioned above, then that speaks to the fact that he was completely aware of how questionable his own scoring had been. And that goes right back to the central theme of the entire scoring controversy– Pacquiao was going to get anything close and was already three-quarters of a winner before ever stepping into the arena.

You can email Paul at paulmagno@theboxingtribune.com or catch him as he continues to piss off the upwardly mobile swine in the boxing business. Paul is a full member of the Burger King Kids’ Club and an ordained minister in the Universal Life Church.