Former welterweight contender Joshua Clottey (35-4, 20KOs) will return to the ring in a junior 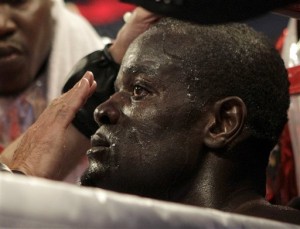 Clottey has won seven of his last ten fights, with losses coming against notables in the sport Manny Pacquiao, Miguel Cotto and Antonio Margarito.  He has wins over Zab Judah and the late Diego Corrales.  If Clottey hopes to fight another top contender, he will need an impressive win this Saturday to begin his junior middleweight career.

Green has lost four of his last seven fights and is coming off two consecutive losses.  His last two fights were against Alfonso Gomez (L KO 2) and Sergio Mora (L TKO 7).

The undercard bout will take place at Reliant Arena in Houston, Texas prior to the main event featuring Julio Cesar Chavez, Jr. vs. Peter Manfredo, Jr.