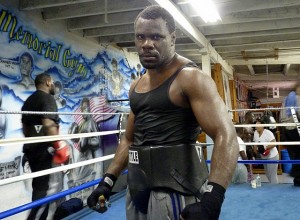 This Saturday from Bally’s in Atlantic City Peltz Boxing features Garrett Wilson 10-5-1 (4 KO) vs. Chuck Mussachio 17-1-2 (5 KO) in a showdown for the USBA Cruiserweight belt.  One look at the records and anyone would think that Wilson is being brought in to be an opponent for Mussachio.  A closer inspection of who each man has fought shows a different story.

Wilson’s five losses have come against three undefeated fighters, one with a single loss, and a loss to Omar Sheika who has challenged for world titles.  Mussachio has not faced a lineup of easy prey but the level of competition has not been as intense as Wilson.

Garrett Wilson has come up through the pro boxing ranks far different than most fighters who find themselves in a place to fight for a regional title such as the USBA belt he currently owns.  Instead of starting off easy Wilson was eager to get in with better talent to test his skills and to collect a better paycheck.

The result of his team’s fight choices produced a fighter who went into a fight with former title challenger Omar Sheika with a record of 7-3.  Wilson started well against Sheika but his lack of experience came out when he punched himself out early.  The experienced pro Sheika, took advantage and knocked Wilson out in the fourth round.

Following another loss after the Sheika fight Wilson took on a new trainer in Rodney Rice and a new perspective.  It was no longer about getting a paycheck but preparing himself for bigger goals in boxing.  Wilson commented on his change in perspective.

“In lines of my way of thinking.  Before willing to go in there with anybody who’s got a pretty good name, make a couple dollars.  My mind state has changed from making a couple of dollars to winning all four world titles.  That’s the main thing that changed is my mindset about the fight game.”

The result has been a far more prepared and experienced fighter.  The work paid off as Wilson avenged his loss to Sheika dominating the fight at Bally’s last April and scoring the USBA belt around his waist.  Wilson knows that his choice of opponents early on hurt his record but also believes it greatly improved his skills and made him a more experienced dangerous fighter.  Now Wilson relishes the opportunity to get in with high level opponents and hopes they take him for granted based on his record.

“I love getting in with guys with good records.  It’s kind of an ego boost for me to beat a guy that is supposed to beat me.  Before I used to jump ahead of myself but because of that there are not too many guys as advanced as I am.  Most of the guys I see out there that’s undefeated or have an excellent record are fighting bums.”

“Actually, to be honest with you, because of my record is the reason I got a lot of the guys recently taking fights.  Not realizing the threat I actually am.  Hopefully they will continue to not see me as a threat and continue to take fights with me.”

I caught up with Garrett along with Philly boxing writer John Disanto at Shuler’s Gym in West Philadelphia last week as he trained and sparred for the upcoming bout.  Wilson is short for the cruiserweight division but carries a heavily muscled frame that gives him the ability to relentlessly pursue taller opponents and bull his way inside.  Wilson also brings a jovial personality that makes him endearing to fans.  He is rarely without a bright smile even during heated exchanges inside the ring.

Wilson further sports one of the most confident attitudes you will find.  In addition to the confidence he sports a polite and fun loving nature that he is thrilled to be a boxer.  Wilson is often spotted at the local fight cards proudly walking around with his USBA belt around his waist as an accessory to a nice suit.

Even inside of Shuler’s gym where they are known for having the best sparring and top fighters including Steve Cunningham, Hank Lundy, Yusaf Mack, and plenty others Wilson exuded confidence that he will handle business Saturday night and move on to bigger opportunities.  But first he has to deal with the tall and rangy Mussachio who will have a sizeable height advantage which he uses behind a long jab and boxing skills.  Wilson hardly seemed concerned about his opponent’s nice record or his size advantages.

“Feeling great, feel excellent, always ready to go into another war.  Chuck is 17-1, I love going in there with an excellent record.  I like to prove myself.”

“I hear a lot of talk about the fight because of how he fights, how I fight, and how I used to fight. 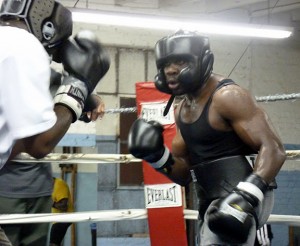 To compensate for his opponents height and skill Wilson will likely be the aggressor and push his way inside where his physical strength can control the fight.

“Body punching, I am gonna try and live in his body.  Like tape worm.  The way I see it going is I see me winning by decision or knockout.  I don’t call the fights, just go out there and handle business.”

Trainer Rodney Rice added what he was willing to share in reference to the game plan.

“We want to be disciplined with the body. We want to stay in that body.  We want to let things happen.  We don’t want to take anything that’s not given. That’s as far as I want to go with that.

Wilson should be extremely prepared for his headlining fight this weekend considering he has gotten the best sparring a fighter can get.  While he trains at the Marion Anderson gym in Philly he hits Shuler’s for the top notch sparring.  Shuler’s has a reputation for having sparring sessions more intense than actual fights.  Garrett talked about his sparring mates and the intensity of the training.

“Charles Hayward, Prince Badi, Yusaf Mack, Dhafir Smith, Derreck Webster, great big list of guys.  Doing pretty good, these guys are upper echelon fighters so I’m getting all the good experience.  Learning the technique I need to win the fight.  From time to time it does, it gets intense with the caliber of fighter these guys are but I will have plenty left for the fight.”

And if he does come out on top Wilson is not shy about what he wants in the near future.

If Wilson can’t get a title shot immediately he has a particular fighter in mind he wants to target.

After chatting with us Garrett got to work for ten rounds of sparring including five with Philly spoiler Dhafir Smith who upset Jeff Lacy last year.  Garrett worked on multiple techniques and after the session was done proved to be his toughest critic.  He looked at John and I asked how he did, but before he could answer stated you can tell me, I was terrible.  Garrett quickly got back to his positive mindset thought saying if he was going to have an off day, better in the gym than in the real fight. 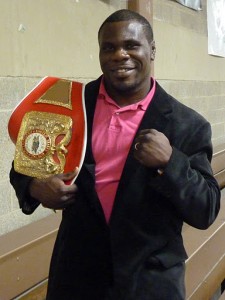 Fortunately for Wilson his trainer has all the confidence in his fighter that he can be at the top of the sport and understands what it will take to achieve a world title.

“I don’t think there is anyone in the cruiserweight division that can beat Garrett, I really don’t.  Only one that can beat Garrett in the cruiserweight division is Garrett.  Garrett is multi-talented.  The reason he is here is because people slept on him.  They didn’t see him coming but now they do.  He has to tighten up what he does, he has to sharpen his punches, he has to the hard work that comes with being a champion.  Champions aren’t made in the gym learning how to fight.  Champions are made outside the gym sleeping, eating, doing that extra mile, the things the average fighter doesn’t do.  But Garrett at top, 100%, meeting all his abilities and potentials, I don’t think there is anybody in the division that can stop him.”

“Joe Frazier by far is one the most underrated fighters in the world.  Joe Frazier is incorporated into my fighting style.  I love watching tapes of Joe Frazier.”