Fans don’t get excited about every fight that comes along. To be honest, neither do boxing writers. For every Miguel Cotto-Antonio Margarito throwdown extravaganza, there are five ho-hum doldrums out there which need to be commented on.

At first glance, Saul Alvarez vs. Kermit Cintron would appear to be such a 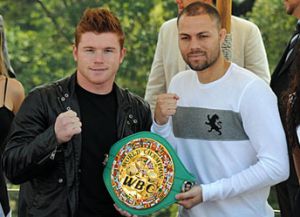 fight. Alvarez is a fighter boxing fans think should be stepping up to better competition by now, and Cintron comes across as a guy who may just need to go away by now.

As with most things though, a closer look paired with a little reflection goes a long way. In this case, it shows a fight is actually something to get excited about. Why? Because the sport of boxing doesn’t always put fighters where they should be when they should be there. If it did, we would have had Mayweather vs. Pacquiao at least once by now, right?

Alvarez vs. Cintron is the right fight at the right time for both participants, and it gives fight fans a chance to celebrate a case where boxing matchmakers got it right.

Saul “Canelo” Alvarez is one of the sport’s youngest and brightest stars. The undefeated junior middleweight fighter has legions of followers as well as a looming potential superfight with fellow Mexican sensation Julio Cesar Chavez, Jr. Sure, we’re all excited about the prospect of that or even other bigger/better things, but a look at Canelo’s resume shows he hasn’t stepped up to that level – not yet.

Luckily, Alvarez knows where he should be. You won’t catch him looking too far into the distant future. Instead, he remains focused and determined on the task at hand.

“I have to fight Kermit Cintron”, he told the media. “That’s my next fight and that’s all.”

It wasn’t too long ago that another undefeated Mexican star was paired against Kermit Cintron. In 2009, Alfredo Angulo came into the fight perhaps an even bigger favorite than Alvarez. Angulo had the style and toughness that would surely overwhelm Cintron before the final bell sounded.

Instead, Cintron fought brilliantly, keeping the usually destructive Angulo at bay with clean counters and clever one-two combinations to hand “El Perro” his first loss as a professional – something he plans to do again against Alvarez.

“I feel that I’m a better fighter than he is,” he told the media. “I’m strong as well, [and] I can punch. It’s going to be an interesting fight. I came here well prepared for whatever he brings.”

Both fighters will need to be prepared to win the fight, and both will also need to bring two other items to the ring that night in order to be successful: poise and persistence.

Cintron is a clever fighter with a big punch. He’s athletically gifted and has been in big fights before, but Alvarez is a legit A+ prospect so Cintron will need to pull out all the stops to pull the upset. Every clever trick a veteran fighter has will need to be on display that night from Cintron.

And while Alvarez is used to being in the media spotlight in Mexico, the lights for this fight will burn perhaps brighter than any he’s ever seen. He’ll need to handle that pressure, as well as everything the experienced fighter Cintron will try to employ against him in order to notch the win.

A win would vault either fighter to greater heights. For Alvarez, it would move him closer to his inevitable clash with Chavez, Jr. For Cintron, it would put him right back in line as a bonified championship contender.

The importance of the bout hinges perhaps even more on something outside either fighters’ personal control: that good, old fashioned boxing rivalry between Mexico vs. Puerto Rico.

Even uber-prospect Alvarez knows it’s not just about him.

“I’m motivated of course like you’re supposed to be when you’re fighting against a Puerto Rican fighter,” remarked Alvarez.

Because Saturday, November 26, 2011 will be another chapter in that age old rivalry. It will be Mexico vs. Puerto Rico fought against the backdrop of another popular boxing paradigm: heralded prospect versus cagey veteran.

It’s worth getting excited about.

Saul Alvarez and Kermit Cintron will meet in a bout that can’t help but define the lasting legacies of each. Either Saul Alvarez is on his way up to the status fight fans expect of him, or Kermit Cintron will expose him as just another pretender while at the same time solidifying the continuance of his career in the sport he loves.