This Saturday night in the boxing backwater of Rotherham in the UK, Ryan Rhodes makes a quiet return to 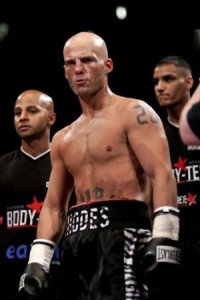 the ring after a disappointing summer in which he mounted a somewhat tame and ultimately fruitless challenge on the WBC Light-Middleweight title held by young prodigy Saul Alvarez.

There were those of us here in the UK (your correspondent included) who thought Rhodes, 45-5 (31 KO’s), would have stretched young Saul back in June, but in the event the Englishman wilted on the Mexican’s home turf, perhaps compromised by the fact that despite a sixteen year and fifty fight pro career he’d never previously boxed outside the UK. Rhodes looked homesick and drained in the fight, and did well to take Alvarez into the 12th round before succumbing.

On Saturday night he entertains one Siarhei Khomitski, a Ukrainian with a 23-8-2 record, a fighter with form here in the UK when he put a full stop to the career of popular Brit Jamie Moore back in 2008. Khomitski’s slate is littered with defeats, but a deeper examination shows that he’s a man who doesn’t shirk a challenge, only loses to decent fighters, and is rarely stopped inside distance.

That said, this is a fight designed to put the Sheffield trickster through his paces, but not to endanger a winning return. Even at 35 the former Spice Boy, a product of the Brendan Ingle fight factory that spawned Naseem Hamed, Herol Graham and others, remains a prodigious talent and may still have something to say about a 154 pound title if Alvarez, as expected, grows rapidly into a middleweight.