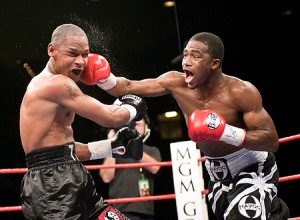 Broner is an exciting prospect ranked 3rd among super featherweights and boasts an amateur career of more than 300 fights.  He comes into this bout with wins over Jason Litzau (TKO 1) and Daniel Ponce de Leon (UD 10).  Broner has been boxing since the age of six and this will be his first shot at one of the world title belts.  He hopes to claim the WBO belt in front of friends and family in his hometown of Cincinnati.  Cincinnati.com reports that Broner doesn’t know much about his upcoming opponent and quotes the fighter saying, “but I know he didn’t make up that record…I’m not gonna play with this guy.  I want to be world champion.”

Rodriguez is an orthodox Argentinian fighter who has just two losses.  Since his last in 2008, Rodriguez has had 13 wins and one draw.   Making his United States debut in the HBO limelight will provide Rodriguez with an opportunity to enter the world boxing stage should he pull off a win this Saturday.