Thanksgiving Day is upon us here at Southpaw World HQ and to steal a line from Max Kellerman, “These four things I know are true.” Turkey will be turned into plywood 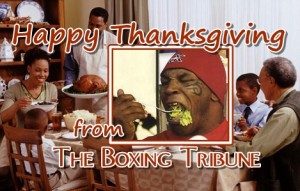 at homes across the nation. Some family will sit the birther Tea Party Republican conspiracy theorist next to the kid they had to drag away from the Occupy Wall Street protests to spend time with her family and hilarity will ensue. At least half of my accounting classmates at the University of Nevada will wake up with stinking booze-and-vomit breath and a hangover like they went 15 rounds with an in-his-prime Mike Tyson after yesterday’s exam. And I’m Fox Doucette—let’s go Around the Horn…er, right. Scratch that last one. But anyway, in my travels as a boxing writer, I’ve seen plenty to be thankful for…and plenty of turkeys. Let’s get to it.

I’m thankful for Pawel Wolak and Delvin Rodriguez. If the NYSAC had decided in its infinite wisdom not to license Antonio Margarito, HBO could just as easily turned the night’s card into a Boxing After Dark episode and let Wolak-Rodriguez II be the main event and the sport wouldn’t miss a beat. You’ll see more about this fight here on the Tribune next week but mark my words—you could spend whatever the asking price is for the Cotto-Margarito PPV and get your money’s worth long before the main event starts in a rematch of what, for my money, is still the Fight of the Year. I’ve said this before, but I say they just sign Wolak-Rodriguez III now and start talking about Ward-Gatti and Ali-Frazier and how those trilogies stack up. The two guys are living examples of everything we love about the sport.

Meanwhile, a big slab of wooden turkey and disgusting green bean casserole for Glen Trowbridge, one of the judges for Pacquiao-Marquez III. Going into the twelfth round, he had Pac up eight rounds to three, so even as Marquez took the final round off and cost himself the fight, Trowbridge had one of those “whoa, people are gonna realize I spent the whole fight counting my money from Bob Arum, I’d better make this look plausible” moments and gave the round to Marquez to make his final card 116-112. The only way Trowbridge should ever be allowed at a boxing event again should be if he buys a ticket. There are plenty of intelligent, reasonable people in this world who love boxing and could do a better job scoring a fight—let them step up. Hell, you could’ve flown me and esteemed editor-in-chief Paul Magno to Houston, let the hometown boy Kelsey McCarson occupy the third judge’s chair, and we’d have given you a better result than what the “paid professional” judges came up with.

I’m thankful for four-round swing fights on ESPN cards. Take two guys of limited talent and skill, guys who are getting a rare shot they might never get again to fight on television, and let ’em throw haymakers at each other for twelve minutes, and there’s almost no way you can lose. Many a Friday night show has been saved by those earnest part-timers—this is why my policy writing FNF recaps has always been to give the swing fighters their due and properly watch and recap their fights. Get those men some drumsticks and an extra slice of pie, especially the goofy 400-pound heavyweights who look more like Eric Cartman than Vitali Klitschko.

Runny cranberry sauce and that vile sweet potato junk with the marshmallows for Mauricio Herrera. I hope you can look yourself in the mirror after those two robberies I had to watch you perpetrate on Mike Dallas and Ruslan Provodnikov. Funny how the biggest turkeys in boxing tend to be the judges, huh? Next time Herrera fights, the commission needs to fly Sean Morehouse, Tim Harrison, and Gary Purfield out to that match and let them judge it. If they say Herrera won fair and square, I’ll start believing it. Going 0-2 in the minds of the fans is no way to move up the ranks at junior welterweight, Mauricio. It just reminds your opponent that he’d better show no mercy and beat the crap out of you to make sure the judges don’t get involved.

Finally, I’m both thankful and willing to make them eat nothing but leftovers for the 2008 US Olympic boxing team. As a writer, sometimes it’s nice to be able to write the same article over and over again, and those Olympians, none of whom have lost in the pros because none of them have fought anyone in the pros (the toughest opponent for any of them was Demetrius Andrade’s bout with a clearly depleted Grady Brewer on FNF in August, although to be fair nobody expected Brewer to put up that little of a fight), give me that chance. Those guys have taken more shots from me than they have from their opponents, and they’re symbolic of everything that is wrong with amateur boxing if their records on the hobo circuit since the Games in Beijing are anything to go by. Nobody’s confusing any of these dudes with Ismayl Sillakh, who had a stellar amateur career and is now in position as a pro to fight for a title sooner than anyone thinks at either light heavy or cruiserweight, or Yuriorkis Gamboa, who by the time he is done with the featherweight division might just stake a claim among the all-time great Cuban fighters in the pros. Step it up, guys. Just like you can only fight so many hobos before nobody will show you on TV anymore, so too can I only write about you so many damn times before the only people who will read my articles about 2008 Olympians will be my editor and my mother.

Anyway, Happy Thanksgiving to all my American readers, happy Columbus Day to all the Canadians (wait, you mean you didn’t just reverse them?), and for my Aussie readers, happy Friday. There’s something cool about having my column teleport into the future through the magic of time zones. Good on ya, mates.

Fox Doucette covers Friday Night Fights for The Boxing Tribune. His weekly column, The Southpaw, appears on Thursdays. Fan mail, hate mail, and turkey sandwiches can be sent to beatcap@gmail.com.