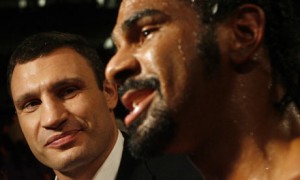 with David Haye’s people trying to thrash out a deal that will result in the two heavyweights sharing a ring somewhere in Germany next Spring.

If these negotiations share any characteristics with those that led to Haye’s limp (excuse the pun!) attempt to topple Vitali’s younger brother in July, then they are likely to be long and tortuous, and riddled with claims and counter-claims. Haye, of course, surrendered all his bargaining chips when he shouldered arms for 12 rounds in Hamburg, allowing Wladmir Klitschko a listless and comfortable defence of his various “crowns”.

If Haye’s post-fight excuses appeared ridiculous in the context of his pre-fight bravado, most of us who’d followed the brash Londoner since his early days clearly identified that there was something up with Haye in Germany that night, and that Wladmir’s victory may have not been all the Ukrainian has trumped it up to be. This week, doubtless in an effort to shame Haye into signing a contract with his brother, Wlad has been turning the screw: “David Haye walks around with a battered ego. He cannot even hold his head high in his own country, because he embarrassed himself when we fought, and showed that he was a chicken.”

The younger Klitschko may be right – Haye has had a stellar career and most would retire happy with his list of achievements, but that final chapter must rankle with David’s competitive instincts. The question is: does it worry him enough to sit through contract talks with Team Klitschko, who are well used to belittling opponents at the negotiating table with paltry financial offers and ridiculous demands. Haye’s been through all that before with Waldmir, and Adam Booth, Haye’s astute manager, trainer and advisor, has indicated little willingness to go through it again, particularly with such a blunt set of negotiating tools.

That said, it’s clear that Vitali is keen on the match, probably for two reasons: first, to knock Haye out and finish the job he feels his brother failed to do, and second, more importantly, he knows there’s a bunch more money on the table for fighting Haye, even with the damage done to his marketability in the summer, than any other heavyweight out there. The point is that Haye left just enough mystique in that German ring in July to suggest the “real” David Haye might just turn up next year and provide the WBC champion with the fight of his life.

That view is strengthened when one examines Vitali’s last fight in September, when the 40 year old laboured through an embarrassing, one-sided beating of Tomasz Adamek, allowing the much smaller man to last into the tenth round of a fight that should never have happened. Vitali is the older and slower of the two Klitschko’s and there were clear signs in the Adamek fight that time is finally catching up with the big man, and a speedy athlete like Haye could very well be his undoing.

There’s a sense that boxing is desperate for the Klitschko era to end. It’s been a desperate period for the sport’s flagship division, and has been brought into sharp relief these last few weeks with the passing of Joe Frazier, who of course represented all that can be wonderful about the heavyweights. The Klitschko’s have reigned by dint of their size and a paucity of American talent, with so many less painful and more lucrative options open to big, motivated athletes in the States. It was Lennox Lewis who ushered in the age of the super-heavyweights, so that the division became dominated by big, lumbering behemoths who relied not on speed and skill but height and weight.

Had the Klitschko’s boxed in Frazier’s era they wouldn’t have merited a top-ten ranking. Until Lewis, fighters who stood over six-feet five and weighed more than 240 pounds couldn’t compete with their smaller, faster rivals. In the hundred years of heavyweight history from John L. Sullivan to Mike Tyson only two “giants” managed to grab the title, Jess Willard and Primo Carnera, both of whom have come to be regarded as very poor champions. Willard, of course, was beaten half to death by a young Jack Dempsey, and Carnera took a hiding from just about every decent heavyweight he fought, so that his ascension to the title is thought to have owed more to his underworld connections than to his ability to fight. There’s plenty of Carnera fight-film on YouTube – and watching him you can’t help seeing a carbon copy of the brothers Klitschko (the stylistic similarities are quite startling!)

So with no Dempsey, Louis, Marciano or Tyson on the horizon to put the Ukrainian’s in their proper place, David Haye still remains boxing’s best chance of reclaiming its most sought after prize. Next month Wladmir brings more ridicule to the sport with a bout against little Jean-Marc Mormeck, a French cruiserweight who’s giving up some 8 inches in height and reach, and 30 pounds in weight, for a crack at the title. The mediocrity goes on, and on.

Should Haye be persuaded to end his premature retirement and sign a contract, those of us who hailed him as the new messiah back in July will cling to the hope that his health then was indeed compromised, and this time round he can set matters straight.