As reported here more than two weeks ago, the rematch between Victor Ortiz and Andre Berto has been signed 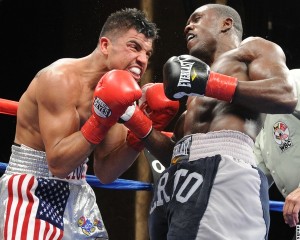 and will take place in either January or February of 2012. However, despite both fighters being HBO mainstays, the return bout has been signed by HBO’s main premium cable competitor, Showtime, for a reported price of $2.25 million.

The aggressive buy of what was thought to be a lock for HBO airwaves may be the opening salvo of a possible HBO-Showtime turf war following HBO’s decision to name former Showtime exec, Ken Hershman, as the head of their sports division.

In anticipation of the more lucrative Ortiz bout, Berto had officially vacated the IBF welterweight strap he won from Jan Zaveck in September, leaving mandatory challenger, Randall Bailey to take on the winner of December 3’s Mike Jones-Sebastian Lujan bout for the now-vacant title.