For anyone that knows anything about comedy, you know who Rodney Dangerfield is, but then again, you may 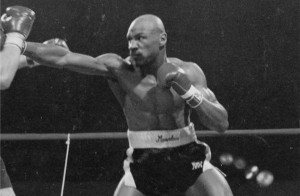 not.  He was a comedian and actor who had a great career but did not get the recognition he warranted throughout his time on stage and screen.  His famous line was, “No Respect”.  His belief was that as much as he did while performing, the industry did not offer him the star studded treatment he should have received and felt as though he rightfully deserved it.

In the sport of boxing, there was many “Rodney Dangerfield” who demonstrated the skills, tenacity, hunger, and heart of a champion, but never received the attention or glory that came with it.  For whatever reason(s), they were under the radar or just overshadowed.  If you are an unofficial historian of the game as I am, you appreciate these kinds of boxers because they went about their business and did what was necessary to win in a legal way.  The true fans always were thrilled to see them box and they always put on a great show.  It is unfortunate to see the “Rodney Dangerfield’s” are hardly or at worst never spoken about.  It is a sad affair to not know about many of these great fighters who have earned the right to say they are one of the best that ever did it.

We are going to focus on four boxers who can easily be called a “Rodney Dangerfield” of boxing.  The boxer must be someone that can falls within these categories:

Marvin Hagler: “Marvelous” no question deserves to be on this list.  He is certainly one of the greatest, if not, the greatest middleweight to ever put on a pair of boxing gloves.  An overall record of 62-3-2 with KO 52, he dominated a division that is considered one of the founding divisions of boxing.  During a span of 2 years, “Marvelous” did not lose a fight.  It was not until 1979 that he received his first title shot and lost a disputed draw.  A year later and three more fights, Hagler traveled to the United Kingdom to win his first title.  This time, he won by TKO in the 3rd round!  After 7 title defenses and adding another world title, which included a win over Vito Antuofermo whom he received a draw against in their first title fight, Hagler finally was able to lure a huge fight verses Roberto Duran.  Receiving a hard fought unanimous decision, he was able to receive another high profile fight against Thomas Hearns.  The fight has been dubbed as the greatest 8 minutes of boxing ever!  The two fighters had a memorable 3 rounds worth of action packed excitement.  Hagler came out victorious with a TKO stoppage.  The fight in which everyone wanted to see was against Sugar Ray Leonard.  Many people felt Leonard was dodging Hagler and would not give him a title shot.  It finally came about in 1987 and Hagler lost a highly contested split decision.  Many fans and experts felt Hagler had clearly won the fight.  It is still a fight that is debated to this day.  Hagler was not able to get Leonard back into the ring and retired afterwards.  “Marvelous” is a fighter that could have easily fought in any era because of his style and workmanlike approach.  He was Glen Johnson with better skills and more punching power.  Hagler endurably qualifies to be on this list as a fighter that should have received a lot more recognition and respect that was given to him.

Larry Holmes: The Easton Assassin!  The name came from the town in Pennsylvania where Larry grew up.  Easily one of the top heavyweights to ever fight.  Holmes had an unprecedented 48 fight win streak that included wins over Ken Norton, Muhammad Ali, Gerry Cooney, and Tim Witherspoon.  Each fighter had either won a world title or fought for one in their career.  After winning his first world title in 1978, Holmes won and defended his title an impressive 25 times.  That is only second to the Great Mr. Joe Lewis.  When Holmes was attempting to tie the record of another excellent heavyweight in Mr. Rocky Marciano, Holmes fought Michael Spinks who was coming up from being the light heavyweight champion to challenge Spinks for his titles and ended up denying him to tie the record.  He lost a highly dubious decision to Spinks and also the rematch a year later.  Since those defeats, Holmes has fought Mike Tyson, Evander Holyfield, Ray Mercer, and Oliver McCall.  Each of those fighters has won a version of the heavyweight championship.  Some argue that when Holmes fought in his prime, it was an era that was after Muhammad Ali and before Mike Tyson.  Even so, Holmes unquestionably made sure people knew who the heavyweight champion of the world was during his reign.  The fight in which Holmes would have loved to take in his prime was Mr. George Foreman.  Foreman would have still been fighting if he had not taken time off during his career.  Just imagine that fight!!!!

Greg Haugen: Think of Micky Ward with more skills!  He was that kind of fighter.  Haugen was a former 2x lightweight and junior welterweight champion and also won a minor league welterweight belt during his heyday.  Greg Haugen fought during an era that had great and even excellent fighters.  He had a trilogy with Vinny Pazienza that went a total of 40 rounds (First two fights were 15 full rounds apiece).  Spilt fights with Hector Camacho.  TKO Ray Mancini and lost a unanimous decision to Pernell Whitaker that went the full 12 rounds.  He was a fighter that did not back down for any reason whatsoever.  Although he was not known to have great power, he was respected by his opponents for his ability to take punishment and also deliver it as well.  Greg will never receive the glory due to fighting in era that had more superior fighters but he was someone that certainly held his own.  He was someone that can be considered a world class fighter and champion in his own rights.

Chris Eubank: We cannot forget about the fighters who come from different parts of the world.  Recently we have seen a good amount of fighters that do not come from the United States.  The fighters we see here in the states are mainly from Mexico, Central and South America.  (Puerto Rico is a part of the US of A).  It is important that we recognize fighters that come from Africa, Asia, and Europe.  Although, some do not come over to the States until well after they should have, we are seeing some starting to do so now.  Those fighters had to look up to someone while they were developing and coming and Chris Eubank is one of those fighters in Europe.  A former middleweight and super middleweight champion, he was one of the best.  Nicked name, “Simply the Best”, he certainly did his best to live up to that name.   As a middleweight, Chris was an undefeated fighter and held the WBO strap.  To win the belt, he beat another British great, in Nigel Benn.  He had three defenses before moving up in weight and winning the WBO super middleweight belt in a dog fight with Michael Watson who unfortunately ended up having severe damage afterwards.  He defended that belt 14 times before losing to Steve Collins in a thriller.  Towards the end of his career, he lost the rematch to Collins as well as fights against Joe Calzaghe and Carl Thompson who gave David Haye his first loss by KO.

There are plenty of boxers that can be placed into The Rodney Dangerfield of Boxing but these are my top four fighters that can easily be considered.  Are they the best fighters ever? Probably not but they can at least claim they were the best at a certain time in their career.  They can also state that they have fought the best during their time when those fighters were in their prime.  Not one of these fighters ducked or made an excuse as to why a fight could not materialize.  You rarely hear their names mentioned in boxing circles and it is distressing they get “No Respect”.

Friendly Fire is a completely fan-generated column dedicated to giving boxing’s hardcore fans a chance to voice their opinions. If you’d like to have your say, contact: paulmagno@theboxingtribune.com for more info.