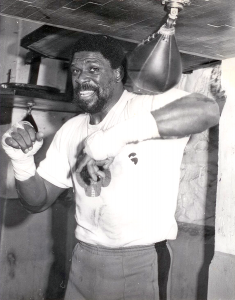 hometown of Denver, Colorado at the age of 70 from complications due to an unspecified stomach ailment.

Lyle, who is best known for his high-profile losses against Muhammad Ali and George Foreman in 1975 and 1976, respectively, had a 10-year career as a pro and scored victories over fighters such as Earnie Shavers, Scott LeDoux, Jimmy Ellis, Oscar Bonavena, and Buster Mathis. Lyle also took on Jimmy Young, Gerry Cooney, and Jerry Quarry in losing efforts. In 1995, at 54 years of age, the heavy-handed Lyle made a brief comeback that saw him go 4-0 against club-level competition. Overall, Lyle finished his career with a record of 43-7-1 with 31 KOs.

In retirement, Lyle worked as a trainer as well as a security guard. His most recent efforts revolved around working with the Salvation Army’s boxing program for underprivileged youth.