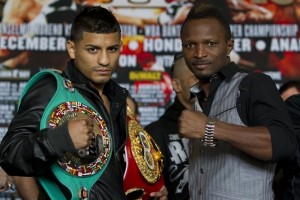 The low blows that dominated the first fight between Mares and Agbeko played a minor role in the rematch, with Agbeko complaining of low blows early to influence the referee, but was hit low on one occasion in the sixth.

Mares started fast and jumped out to an early lead in the fight, sustaining a cut over his right eye in the second round that poured blood throughout the fight. Agbeko took the initiative offensively most of the night, but Mares was able to slip many of Agbeko’s wide left hooks and counter with his right.

Mares faded slightly in the seventh round, but came on strong late, stunning Agbeko with a legal left hook to the body in the ninth and wobbling him twice in the eleventh round. After Agbeko pulled to within two rounds of Mares on The Boxing Tribune’s scorecard, Mares took the last two rounds to finish 116-112 overall.

After the fight, Mares said he was glad the fans got to see the real Abner Mares, and that he would move up to the super bantamweight division to take on all comers.

Anselmo “Chemito” Moreno (32-1-1, 11 KOs) scored a unanimous decision victory over Vic “Raging Bull” Darchinyan (37-4-1, 27 KOs) made the ninth successful defense of the WBA bantamweight title he won in 2008. Darchinyan kept the fight close in the early rounds, but began to fall apart as he was unable to land anything of note. Frustrated at swinging at air, Darchinyan twice threw Moreno to the canvas; once in the fourth and again in the twelfth..

The awkward and defensive Moreno mixed his offense to confuse Darchinyan, ripping him to the body with right hooks, and picking his spots with the left hand.  Moreno, not known for his punching power, stunned and hurt Darchinyan several times throughout the fight.