Boxing can ill afford the kind of injustice meted out to Englishman Dereck Chisora in Helsinki on Saturday night.

Chisora, who has laboured at times under the perception that he is something of a clown, had for once whipped himself into some kind of shape for his tilt at much-fancied Robert Hellenius for the EBU’s vacant heavyweight crown.

In his previous big fight, Chisora took to the ring against his countryman Tyson Fury clearly out of shape and lacking in conviction, to the extent that he was overheard telling his cornermen before the bout 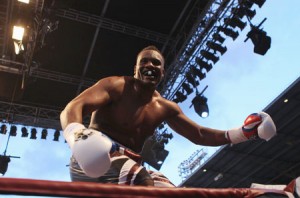 started that he felt incapable of winning. He weighed 261 pounds, shaped up like a pudding, and fought like one too. He was easily outpointed.

Put aside for a moment Chisora’s foolish pre-fight shenanigans, when he put his hands on Hellenius at the weigh-in and variously threatened to kill the big Fin, and then to make love to him (!), the Londoner had clearly used the intervening period to re-acquaint himself with the physical demands of his sport.

On Saturday, Dereck scaled 243 pounds, and looked altogether a different fighter. From the first bell he chased the startled Hellenius around the ring, and didn’t let up until the last gong. Sure, he shipped a few blows as he advanced, but there was little doubt that he’d landed vastly more shots than his homegrown opponent, and that the fight was his.

Disappointingly, as is so often the case in European rings, the judges appeared blind to the visiting man’s efforts, and awarded the fight to Hellenius. Frank Warren, the Englishman’s promoter, was apoplectic. He said “I know that sometimes I have a moan about decisions, but what happened on Saturday night in Helsinki was one of the worst decisions I’ve seen in the sport in a very long time.”

What made the whole charade worse was that in this age of heavyweight mediocrity Chisora had produced a performance of rare quality, which followed another such display in the same ring by the WBA’s current heavyweight champion Alexander Povetkin. Povetkin accepted the challenge of American Cedric Boswell, a 42 year old with an impressive record, but a reputation for long periods of inactivity which he occupied by making a living as a sparring partner. For a few rounds Boswell showed a loose, languid style which promised much, but when he began to taste some of the Russian champion’s leather he steadily unravelled. Povetkin knocked Boswell out in the eighth.

Chisora, of course, wasted a good deal of the early part of 2011 preparing for a fight with the younger Klitschko, which failed to happen after Wladmir pulled out with various injuries, and then set up the David Haye fight, leaving Dereck out in the cold. Povetkin is said to have been offered a Klitschko fight, but trainer Teddy Atlas declined on the grounds that his man wasn’t yet up to it. One wonders, given Vitali’s awful performance against Adamek, and Wladmir’s persistent reluctance to engage in anything like a meaningful fight, if Povetkin’s time hasn’t come.

The prevailing view is that both Chisora and Povetkin, both around 6 feet 2 inches tall, are too small to compete evenly with the giant Klitschko’s. Bunkum. Both fighters showed Saturday night that it’s speed and technique that wins fights, and if a heavyweight prepares properly, and can motor for twelve rounds, then size is irrelevant.

Povetkin has all the qualities needed to topple the Ukrainians. He’s an Olympic champion, is well-schooled, and showed in Helsinki he has speed, accuracy, and an impressive variety of tools. After the fight the rumour flying about was that Alexander’s next bout would be against his next mandatory challenger, one Hasim Rahman, who’s racked up five wins against meaningless opposition since his own, frankly pathetic, tilt at a Klitschko three years ago. That’s a fight that doesn’t need to happen.

If Povetkin does waste his time with Rahman, on Saturday night’s evidence it’s Dereck Chisora and not Robert Hellenius who has the best chance of finally knocking the Klitschko’s off their perch. Presumably, Warren, who’s not without influence in Europe, will secure his man at least a rematch with Hellenius, as I suspect Wladmir, who today pulled out of his pointless match with Jean Marc Mormeck, might now be less keen to step into a ring with the re-born Englishman.