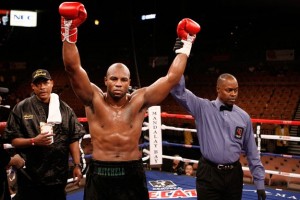 American heavyweight contender, Seth “Mayhem” Mitchell (23-0-1, 17 KOs), of Brandywine, Maryland, makes his HBO debut as the co-main event on Saturday December 10. Mitchell will square off with veteran heavyweight, Timur Ibragimov of Uzbekistan. The Boxing Tribune recently spoke with Mitchell, the former Michigan State All-Big Ten Linebacker, as he prepared for his HBO debut in front of his hometown fans. Mitchell talked about his opponent, the hype that surrounds him as an American heavyweight hopeful, his overall performance in 2011, and his expectations as he moves forward in his career.

The Boxing Tribune: Hey, Seth. Thanks for calling, man. How’s everything coming along right now?

Seth Mitchell: Everything is going well, training camp is peaking out at just the right time. I’m excited about December 10.

BT: That’s good to hear, man. I wanted to talk to you about this past year and what you’ve got coming up. You’re taking on Timur Ibragimov, and he’s a pretty big name. What does this fight mean to your career?

SM: It means a lot. This is my HBO debut so I definitely want to go out there and look impressive and get the win. At the same time I’m not letting it get me too anxious. I’m not going out there too aggressive to get the knockout, but I’m definitely excited about the opportunity on the big stage. At this point of my career I want to be on this stage. When the stakes are high you know you’re headed in the right direction. It’s something that I want in my heart and in my mind I truly believe I’m ready for this next level. I’m preparing hard and I’m not underestimating my opponent at all. I believe, I know he’s going to be ready 100 percent as well come December 10 and I just want everybody to come out and support the fights because there’s going to be some great fights that night. I definitely plan on coming out victorious.

BT: You were supposed to have your HBO debut in August on the undercard of Guerrero-Maidana, but that fell apart. Did you think you’d be getting a second chance to be on HBO so soon?

SM: Absolutely. I believe that I have great management, my advisor Al Haymon, my trainer Andre Hunter, and my promotional company is arguably one of the best promotional companies out there – Golden Boy. So I knew, even when my fight was canceled, I’d be lying to you if I said I wasn’t disappointed, but at the same time I knew because of the people that I had that I was going to be back in action soon. Then three weeks later I was fighting on a main event in Las Vegas, and I got an extra treat because I was out there for the Mayweather fight, so I got to go to the Mayweather fight as well. But they told me I would be back on HBO soon, so I wasn’t really worried about it. After my fight I knew I was going to be on HBO on November 26 or December 10, it just so happened it was December 10. And the icing on the cake is it’s at home. I have a great team, great management behind me and my job is to stay focused and not worry about that stuff and always be prepared, and so far that’s what I’ve been doing.

BT: You’re getting these chances to be shown on HBO. DO you feel like a lot of hope for the American heavyweight scene is being placed on your shoulders? I mean, there isn’t much out there who hasn’t already lost to a Klitschko brother.

SM: Absolutely. I think sports in general are therapeutic for a lot of people and I believe everybody wants to have somebody to relate to. Us, as Americans…back ten years ago Americans dominated the sport, especially in the heavyweight division, and they want that back. The fans want somebody to be able to relate to, and if they label me as the next American hope, then that’s good. I wasn’t the one that said it, but I believe that God has blessed me with the tools and the athletic ability to be successful in the heavyweight division. I’m just going to continue to stick around, work hard, and stay humble. I’m very confident, but I’m not cocky. I believe in myself that I can become the heavyweight champion of the world, and I think that day is going to come sooner than later. I’m just excited about the opportunities that are being presented to me and I just want to go out and take full advantage of them.

SM: Timur has never been stopped. So I would be lying if I didn’t say I wanted to be the first person to stop him, because I do. But at the same time, even if you watch my fights I don’t go out looking for the knockouts. I stick to my game plan, I have a lot of speed, I have a lot of power, and I apply a lot of pressure. If I’m on my A-game I don’t think too many heavyweights can last ten rounds with me. But I don’t go out there reckless, I don’t go out there too aggressive, I just stay behind my jab and put my punches together and get the knockouts if they’re coming. I definitely want – even if I don’t get a knockout I don’t want it to be like a war because it’s not ‘you hit me, I hit you’. You know, that might be exciting for the fans, and I love to watch those kinds of fights, but I necessarily don’t want to be in those fights, but if it comes down to that I have the dog in me. I can stand there and bang with you. If it comes down to fighting in a phone booth I can fight in a phone booth. I want to win the fight and I want to knock him out and if the knockout doesn’t come I want people to say, ‘wow, Seth really outclassed that veteran’.

BT: That’s a good goal to have. Okay, so you’ve fought three times already this year, this will be your fourth. You’ve won all three previous fights by knockout, how would you grade your performances and growth this year?

SM: I would grade myself very high, but at the same time I did what I was supposed to do. I mean, I fought with Hector Ferreyro, and he was a veteran, but at the same time if I would have went six or seven rounds with him people would have been asking why I went six, seven, eight rounds with him. He was a tough challenger but I did what I had to do. Evans Quinn; he had just went nine rounds with Lihova….I can’t pronounce his name [Liakhovich], but I went in there and I made him quit in the first round. I did a lot of good things in each of those fights. When I fought Charles Davis he had just had a draw with Monte Barrett, and I stopped him in the second round. Good performances in each of my fights, I showed growth and improvement in each of my fights, but when you look at it, I did what I was supposed to do. And that’s why I’m so excited about this next fight, because there’s a lot of people out there that are predicting me to lose. Some people are saying I’m gonna get stopped, or that I’m getting in over my head, but they won’t be saying that after December 10. I’m very excited about this fight. I respect Timur, I know he has a lot of tricks up his sleeve, he’s a veteran, 30 wins, 3 losses, 1 draw, never been stopped. I believe there’s a first time for everything, and hopefully on the tenth it’ll be the first time he’s been stopped and I can put a feather in my cap. But I’m not underestimating him at all.

BT: You obviously have seen or heard the people that have given Timur Ibragimov a good chance to beat you. Do you agree and think that this is your biggest test to date?

SM: Oh, hands down it’s my toughest test to date. On paper he’s fought a lot of big names and he’s never been stopped, and he’s got 30 wins and 3 losses. The thing that sticks out the most to me is in his 34 fights he’s never been stopped, and that’s saying something. You know, you can have 30 wins, 3 losses, and 1 draw, and in those 3 losses you could have been knocked out in all your step-up fights. That’s still a great record but in those 3 losses you get knocked out. But he hasn’t been stopped and he’s durable, he’s been in there. I’m probably not going to possess anything that he hasn’t seen. You know, he’s probably seen power, he’s probably seen speed, but I think once he gets into the ring it’s going to be different. And I truly feel, and I’m confident in my abilities and I’m just looking forward to the victory and putting on a great fight. I’d be lying to you if I said I wasn’t very confident that I won’t be victorious come December 10.

BT: Without looking ahead past Ibragimov, you still have to go out there and beat him, assuming you do, what does 2012 look like?

SM: 2012, I’m expecting bigger and better things. I’m expecting to be back on HBO, as far as calling out anybody, that’s not my style. As a fighter I sit down after each fight and I talk with my promoter and my team. We sit down and we come up with my next opponent. I definitely want to step up and fight somebody that’s top 15, top 10, I’m really looking forward to the opposition. I’m looking forward to big things in 2012.

BT: So you’re not looking for any easy outs?

BT: Alright, Seth. I think I’ve taken up enough of your time today so I’ll let you get out of here by giving your closing thoughts and anything else you didn’t get a chance to say.

SM: I just want to thank all of my fans and all of my supporters for believing in me and for supporting me. I want everybody to tune in to HBO on December 10. It’s going to be a great card, I’m the co-main event of Lamont Peterson and Amir Khan, and it’s going to be a great night of boxing. I just want to ask everybody to keep me in their prayers and I’m going to continue to do my part, which is stay humble, stay focused and hungry. And I wanted to thank you for taking the time to interview me, I really appreciate it.