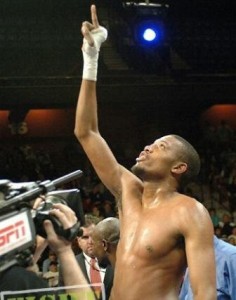 December 10th in a super middleweight bout at the Bell Centre in Montreal, Canada.

Stevenson is a 34-year-old southpaw coming off two consecutive wins, both by way of knockout.  His one loss comes by TKO 2 in 2010 against Darnell Boone who is now 19-18.  Stevenson now has the burden of proving that loss was a fluke and that he deserves to be among super middleweight contenders.

Pryor, Jr. is ranked 9th in the world among super middleweights but has lost two of his last three fights, both by unanimous decision.  In September of this year he lost to Thomas Oosthuizen, now 17-0, and in January 2011 he lost to Edwin Rodriguez, now 20-0.  If he wants to compete among the elite like his famous father did, Pryor, Jr. needs to make a statement this Saturday.

The title bout will be part of the “Fast and Furious” series and will co-feature David Lemieux vs. Joachim Alcine as well as eight other scheduled bouts.