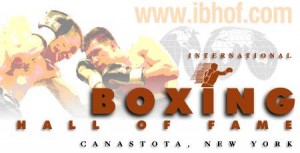 Also included in the class of 2012– welterweight and middleweight contender Cocoa Kid in the “Modern” boxer category, Newsboy Brown, Leo Houck and Jake Kilrain in the “Old-Timer” boxer category, James Wharton in “Pioneer,” and promoters Hugh D. McIntosh and Rip Valenti in the “Non-Participant” category.

The official induction to the hall of fame will take place at the IBHOF’s annual weekend, scheduled for June 7-10 in Canastota, N.Y.