A year ago, the junior welterweight division was being touted as the deepest, most competitive in the 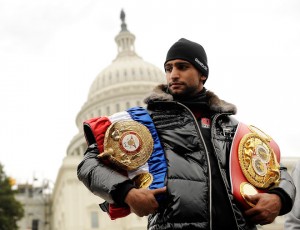 sport. Now, after several key bouts, the division has thinned out a bit, but it’s still among boxing’s best– And sitting atop the deep 140 lb. class is IBF/WBA champ, Amir Khan.

Depending on who you ask, the UK media magnet and Olympic silver medalist, is either the top junior welter in the world or a very close second to American, Timothy Bradley.

Yet, the 24-year-old fighter from Bolton, Lancashire is, by most assessments, still a work in progress.

Only in boxing’s chaotic world of nepotism and promotional shortcuts can a fighter be considered among the divisional elite while simultaneously existing as a talented, but incomplete prospect.

Amir Khan fits both bills perfectly. He’s the elite junior welterweight who has beaten three legitimate Top 5 junior welterweights (Judah, Maidana, Malignaggi) in his last four bouts. He’s also the fighter who, more often than not, has looked less than the sum of his parts.

In that fight, Khan’s athleticism and raw ability allowed him to build a huge early lead and, essentially, run out the clock as Maidana got stronger and began to hurt the talented defending champ later in the contest.

In his next fight, Khan scored a clumsy technical decision over fringe contender, Paul McCloskey, looking absolutely befuddled at the idea of how to handle an awkward southpaw.

A KO 5 win over Zab Judah was next for Khan and while Judah was the reigning IBF 140 lb. titlist at the time, the name on paper meant more than the actual accomplishment. The tentative Judah was never in the fight and seemed resigned to his loss from the moment he became aware that he was dealing with someone younger, bigger, stronger, and faster than him.

So, with so much time on the boxing main stage, we come back to the same description that could’ve been used to categorize him from the moment he first laced up the gloves– Amir Khan is a talented athlete with world class abilities who has yet to really put it all together.

Under the tutelage of trainer Freddie Roach, Khan has indeed improved and has refined his technique well beyond the level at which he used to operate when he was living the life of a big fish in the small pond of UK lightweights.

He’s still stiff at times and his movement, while increasingly fluid, seems forced. And like a lot of big, strong kids fighting in divisions well below their “walking around” weight, Khan has fallen in love with his power and labors to throw meaningful combination.

But, again, he’s only 24 and still very much a babe in the boxing woods, despite the two world title belts around his waist and the talk of imminent super fights on the horizon.

This Saturday, the boy king will take on tough throwback contender, Lamont Peterson (29-1-1, 15 KOs) in Peterson’s hometown of Washington DC. And, while Peterson is probably the best all-around fighter that Khan has ever faced, the defending champ will still enter the ring with a considerable advantage in raw ability and athleticism.

But despite Peterson’s status as a real challenger, ranked 4th in the world by The Boxing Tribune, Khan’s greatest challenge this Saturday at the Convention Center in DC, will be against himself.

An impressive win keeps him moving forward towards a mega-bout that will allow that step up from well-known champ to mainstream star. Likely his last bout at 140 lbs., Khan will make the move to the glamor division of welterweight and, possibly, a bout in the near future with Floyd Mayweather or, at the very least, the winner of the Victor Ortiz-Andre Berto rematch.

From there, the sky’s the limit for Khan.

A good looking, well-spoken fighter with elite-level talent is worth his weight in gold. Barring some complete psychological collapse, Khan’s status as a future superstar is all but etched in stone– especially considering that the fighter has already earned his way to the top rungs of the boxing ladder as a 24-year-old work in progress.

From this point on it’s Khan vs. Khan in an effort to become the fighter he can potentially become.