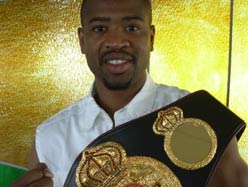 Alcine, a former junior middleweight world titlist who was 0-1-1 coming into this bout and hadn’t won a bout since 2009, boxed well and never seemed to be affected by Lemieux’s punching power. Lemieux, who was knocked out in seven rounds by Marco Antonio Rubio last April, tried to pressure his opponent, but could never impose himself on Alcine or make his heavy hands much of a factor.

Lemieux controlled the bout early, even pinning Alcine against the ropes, launching a barrage of shots that were mostly picked off by the former WBA 154 lb. titlist. In the fifth, though, Alcine began to come on and even up the bout with a more balanced skill set and more consistent execution than the 22-year-old Lemieux.

Stevenson proved to be too much for the lanky Pryor, who tried to move and use his height and reach advantage, but just wasn’t strong enough to keep the bullish Stevenson from coming forward at will. Pryor would be sent to the canvas a total of four times– once in the first, twice in the third, and one final time in the ninth round– before his corner waved off the contest.