Lamont Peterson 30-1-1 (15 KO) overcame a rough start and several technical disadvantages to pull the upset of Amir Khan 26-2 (18 KO) in front a wild hometown audience of nearly 9,000 at the Walter E 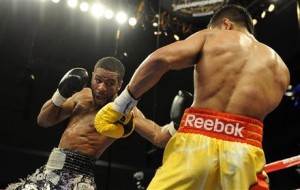 Convention Center in Washington DC.  Peterson won by split decision with scores of 113-112 twice and 111-15 on the dissenting card in a back and forth slugfest.  For the record, the Boxing Tribune saw it 113-112 for Amir Khan.

Peterson came in the underdog and the widely accepted opinion was that Khan’s speed and technical boxing skills would be too much for the tough DC native to overcome.  Early on, it appeared this opinion was accurate.  Khan started fast using his superior speed and movement to pound Peterson with combinations in round one.  Khan put Peterson on the canvas twice in round one but only one was ruled a knockdown as the second trip to the floor came from a shove.

Khan continued his control in round two and it seemed he might get a quick stoppage.  Then Peterson turned the tide in round three by turning the boxing match into a tight quarters brawl.  Peterson managed to push his opponent into the ropes where he was able to gain an advantage with his strength muscling Khan into a defensive posture.  Once he had Khan against the ropes he went to work slamming both fists into the body and head.  The excitement brought the crowd to its feet and turned the convention center into a wild atmosphere.  With every thudding blow Lamont landed the crowd rose to its feet and roared to egg on their hometown hero to keep attacking.

The bout swung from boxing match to brawl throughout with momentum swinging back and forth depending on the style of fight that was taking place at any one time.  From a distance Khan’s speed and skill were too much.  But when Peterson got the fight into the phone booth Khan had no answers and absorbed one punch after another, especially the right uppercut that Peterson stunned Khan with multiple times.

Khan lost a point in round seven and again in round twelve for excessive pushing off with his elbow.  While Khan was doing some shoving the deductions seemed sudden as neither was preceded by any warnings.  The two points lost ended up being crucial as they cost the Bolton England native his IBF and WBA belts which stay in DC with Peterson.

The bout was extremely close and several rounds could have gone either way but Peterson earned the victory by digging deep and fighting through adversity with extra help from a supportive audience.  Khan had his share of supporters as well, known as Khan’s army who took to blowing air horns throughout the fight, but they were hardly a match in the noise department for the Washington DC crowd that was determined to play their part supporting the local fighter.

Afterwards Peterson spoke of his background and how it prepared him for tonight.

“I stand for something and I’ve been taught since I was young not to fall for anything.  In the ring I am the same way.  I’m not going to just lay down for anyone.”

Khan was disappointed with the decision and the point deductions stating “it was like I was against two people, the referee and Lamont.”  Khan believed he was the clean fighter and that Peterson was holding his head down throughout the night.  He stated he is ready for a rematch.

Credit goes to both fighters as they engaged in a highly entertaining bout that could be a fight of the year candidate.  Both were beaten up by the end of the bout as Khan had a large mouse under his left eye and Peterson’s right eye was basically closed.  While Khan still has to learn how to fight when he is being pressured, he showed his chin is not as shaky as thought. He absorbed a ton of bombs and fought on, often throwing his arms in the air to taunt his opponent saying his shots were not hurting him.  Peterson for his part showed the grit that comes along with his well-known difficult background by coming back in a fight that looked lost early on.

Peterson stated he would definitely give Khan a rematch. Considering the close nature and excitement the fight, another go round would certainly be welcomed by fans.  The question will be, does the new IBF/WBA champ Peterson get to keep home field advantage next time or does the fight make its way across the pond to Khan’s native England.

In the HBO co-feature Brandywine MD native and former Michigan State linebacker now heavyweight contender Seth Mitchell, was impressive stopping veteran contender Timur Ibragimov.  After a competitive first round it was all Mitchell in round two.  Mitchell who had rabid crowd support landed big left hooks and straight rights throughout the round that had Ibragimov reeling.  Late in the round Mitchell landed a left hook that sent his opponent into the corner.  He followed up with a straight right to Ibragimov’s head and referee Malik Waleed had seen enough and jumped in to stop the bout giving Mitchell a TKO victory at 2:48 of round two.

Mitchell is one of the few American heavyweights with potential and he may now carry the mantle of American with the best chance of toppling a Klitschko to win the heavyweight title. Stopping Ibragimov 30-4-1 (16 KO) was impressive considering the veteran had never been beaten inside the distance to this point and is considered a durable heavyweight.  Mitchell 24-0-1 (18 KO) could certainly use more seasoning before taking on a Klitschko considering he started boxing late after his football career ended but he certainly has tremendous upside and potential.

The final non-televised bout featured Washington DC native and brother of the main event winner, Anthony Peterson in an eight round lightweight bout with veteran Daniel Attah, also of Washington DC.  Peterson has not fought since his DQ loss to Brandon Rios over one year ago where he was getting badly beaten before being tossed for repeated low blows.

The lightweight contender Peterson had an easy outing tonight as he had no problem picking apart a badly outclassed Attah, who spent half the fight on the ropes being pounded to the head and body and the other half running around the ring to escape punishment.  All three judges scored it a shutout by scores of 80-72.  Peterson looked decent against lesser competition but probably should have been able to get Attah out of there considering the wide gap in skill.  Peterson moves to 31-1 (20 KO) while Attah falls to 26-9-1 (9 KO).

Dublin native Jamie Kavanagh who now trains at the Wildcard gym in Los Angeles fought to a majority draw against Ramesis Gil of Puerto Rico.  Kavanagh is a highly touted lightweight prospect who drew the attention of top trainer Freddie Roach but hardly looked the part tonight.  Kavanagh 8-0-1 (3 KO) landed his share of punches but was lacking on defense as Gil 6-3-5 (5 KO) had no trouble landing shots of his own.  Kavanagh suffered a large cut in round five over his right eye from an accidental clash of heads.  The scores were 58-56 for Kavanagh while the other two judges saw it 57-57.

Fernando Guerrero got back in the win column after his KO loss to Grady Brewer with a fifth round knockout of Robert Kliewer.  Guerrero easily controlled the entire fight teeing off on his overmatched opponent.   It was target practice for the Dominican native as he regularly pushed Kliewer into the ropes to land combinations to the head and body.

Guerrero scored a knockdown in round two and then another in round four.  Guerrero pounced on his hurt opponent in round five getting another knockdown.  When Kliewer 11-14-2 (5 KO) got to his feet on wobbly legs Guerrero 22-1 (17 KO) charged across the ring and landed a straight left that sent his opponent sprawling to his back.  Enough was enough and the bout was halted for a KO at forty five seconds of round five.