Should Ashley Theophane achieve his stated aim of mixing in world class in the 140 pound division, it’s 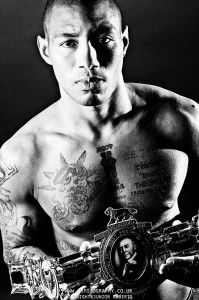 doubtful he’ll meet with more stubborn resistance than that provided by unheralded Ben Murphy in Peterlee this Saturday night. Theophane, now 31-4-1 (9 KO’s), struggled mightily but managed to pull out an eleventh round stoppage in defence of his British crown.

Murphy, who usually fights at between 130 and 135 pounds, had taken the fight on three days notice, and came into the ring determined to take his chance. From the first bell he jumped all over the champion, stuck his head in Theophane’s chest, and whaled away with wide hooks and uppercuts, so that on most cards he took the first six rounds. Theophane had little clue how to handle the tiny five feet 3 inch buzzsaw, and simply allowed himself to be buffeted around the ring. When he did push out classy looking combinations, it was clear that he didn’t have the power to deter the challenger.

It was the eighth round before Theophane began to exert a measure of control. He opened a cut over Murphy’s left eye, and began to work well off the ropes as the Hove man began to tire, having put in an awful lot of work in those opening rounds. In the dying seconds of the tenth round a sharp left-right combination from Theophane wobbled Murphy badly, and he when he tried to continue his onslaught in the eleventh he looked like he was wading through mud. A few more classy combinations from Theophane had Murphy backing up and when he wilted on the ropes after a right hand from the champion, referee Howard Foster stepped in. There were few complaints from Murphy or his handlers, despite the fact that I still had him a couple of rounds in credit at the end.

This was a difficult night to make any judgements about Theophane’s future prospects. He looked classy at moments in the fight, but one suspects that a lack of true power may thwart his ambition to mix it with the world’s best. Murphy, now 8-5-1, gave a performance that belied his sketchy record, and will be a promoter’s favourite in future given his all-action, no nonsense style.

In the chief support Chris Edwards defended his British Flyweight title, and in the process avenged a previous defeat, when he turned back the challenge of Shinny Bayaar with a unanimous 12 round decision. Edwards was the boss throughout, and won handily on all three cards, 117-112 twice, and 116-113.

Edwards, now 17-14-3, is remarkable as a late developer, and must be unique as a domestic titleholder having lost six of his opening seven bouts as a professional. With a Lonsdale belt now his to keep, and the European Flyweight title vacant, he will look across the Channel for his next outing, whilst Bayaar, at 34, has been a first-class servant to British boxing and may now decide it’s time to hang up the gloves.