WBC heavyweight champ, Vitali Klitschko (43-2, 40 KOs) apparently has most of his 2012 schedule already 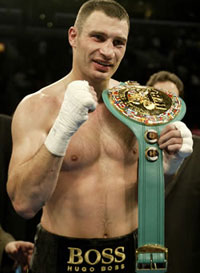 booked with a title defense on February 18 against the UK’s Dereck Chisora at the Olympiahalle in Munich, Germany and then, in July, a planned bout with former WBA heavyweight titlist, David Haye.

Chisora is coming off a controversial split decision loss to “Nordic Nightmare,” Robert Helenius on December 3. The 6′ 1½″ Zimbabwe-born, British resident holds TKO wins over Danny Williams and Sam Sexton as well as a twelve round unanimous decision loss to Tyson Fury for the British heavyweight title he won from Williams.

Haye (25-2, 23 KOs), the former three-belt cruiserweight world champion, will be coming back from a self-imposed retirement he announced earlier in the year following an embarrassing one-sided unanimous decision loss to Wladimir Klitschko in July.

The 40-year-old Vitali Klitschko last defended his title in September with a tenth round stoppage of Poland’s Tomasz Adamek in the challenger’s home country.

The 6′ 7½″ native of Kiev, Ukraine is 8-0 with 6 KOs since returning from a four year retirement in 2008 to capture the WBC title from Samuel Peter.