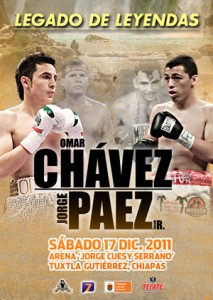 Chavez, son of Julio Cesar Chavez, has begun working alongside his brother, Julio Jr., at the Wild Card Gym in Los Angeles under the guidance of trainer, Freddie Roach. The 21-year-old from Culiacan, Sinaloa has yet to face an opponent above the club level and, at times, has struggled with in-ring focus and basic defense against that low level of opposition. Paez Jr. represents a significant step up in class for Chavez.

“Paez is a good fighter with a difficult style,” Chavez told Record.com, “But I’ve seen that he can’t take a punch and I can punch hard. If things play out like I want, I think I can knock him out in four or six rounds.”

Paez, son of Jorge “Maromero” Paez, has also yet to face an elite-level opponent, but has fought an overall slightly higher level of opposition than Chavez. Sitting atop the twenty-four year old’s resume is a twelve round unanimous decision over faded former lightweight champ, Jose Luis Castillo last March.