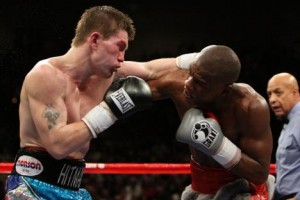 The Ward vs. Froch battle not only highlights two of the sport’s very best in head to head combat, it also represents the continuance of a long-standing boxing rivalry between the United States and the United Kingdom.

Here’s a look at the ten biggest bouts in USA vs. UK history:

This Ring Magazine Fight of the Year for Benn’s WBC super middleweight title at the London Arena was a true thriller that, sadly, had a tragic end for American, McClellan. Despite being knocked out of the ring in the first round and also tasting the canvas in the eighth, the UK’s Benn battled back to stop the heavy-handed former middleweight champ in the tenth. McClellan would suffer extreme brain damage in the bout that rendered the fighter blind, nearly deaf, and unable to walk without the aid of a cane.

Read the Rest of the Article on Yahoo! Sports, Click HERE