Ioka’s professional career began in 2009.  Two years later, he won the WBC title belt with a TKO win over Oleydong Sithsamerchai, who is now ranked5th in the world among strawweights.  Ioka 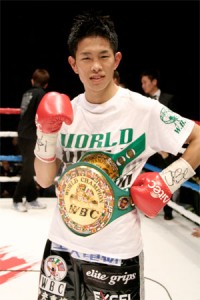 sent Sithsmerchai to the canvas in the second and fifth rounds.  In the fifth, the referee stopped the fight without completing the count.  Ioka is currently ranked 2nd in the world among strawweights.  This will be his second title defense.

Chalermchai also began his career in 2009 but has yet to face any contenders in the division.  Saturday will be the Thai fighter’s first twelve round bout.