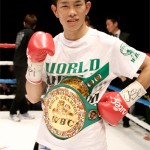 WBC strawweight titlist, Kazuto Ioka (8-0, 5KOs) will take on Yodgoen Tor Chalermchai (8-0, 4KOs) in his hometown of Osaka, Japan on Saturday, December 31st. Ioka’s professional career began in 2009.  Two years later, he won the WBC title belt with a TKO win over Oleydong Sithsamerchai, who is now ranked5th in the world among strawweights.  Ioka sent Sithsmerchai to the … END_OF_DOCUMENT_TOKEN_TO_BE_REPLACED

Nobuo Nashiro (15-4-1, 9KOs) will take on Petch Twins Gym (9-7-1, 7KOs) in Osaka, Japan.  The super flyweight bout will take place on Saturday, December 31st. Nashiro lost the WBA super flyweight title in a rematch bout with Hugo Fidel Cazares in 2010.  In 2011, he had two chances to obtain the WBC superflyweight title.  He faced two top five fighters in Tomas Rojas and … END_OF_DOCUMENT_TOKEN_TO_BE_REPLACED 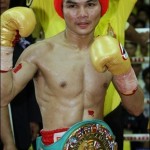 Pongsaklek Wonjongkam (83-3-1, 44KOs) is scheduled to defend his title against Hirofumi Mukai (5-1) Friday, December 23rd in Bangkok, Thailand. Wonjongkam, a southpaw, is ranked 1st in the world among flyweights and is coming off a UD win over notable Edgar Sosa.  He’s fought six times in 2011 and has won all six bouts, but four of those are against fighters with less than … END_OF_DOCUMENT_TOKEN_TO_BE_REPLACED