At a public appearance in Mexico City, Juan Manuel Marquez told the assembled media that it’s now or never for a fourth bout with Manny Pacquiao.

“After the first Pacquiao fight, I had to wait four years and after the second, three more years passed. That’s why if the fourth isn’t signed in 2012, there won’t be another fight,” the 38-year-old Marquez 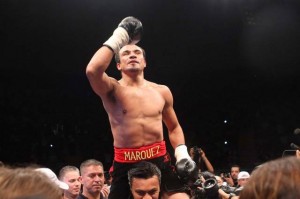 told the assembled media outside of the Hogares Providencia Padre Chinchachoma, a home and education center for street children. Marquez was there to deliver a $5,000 donation on behalf of WBO President, Francisco Valcárcel.

Marquez would go on to say that if the Pacquiao rematch can’t be signed, he would like to make a run at a world title at junior welterweight, possibly against WBC 140 lb. titlist, Erik Morales.

Marquez-Pacquiao III, on November 12th, ended in a controversial majority decision victory for Pacquiao. Marquez supporters also contend that the Mexico City native was shortchanged in his two previous bouts with the Filipino superstar, which ended in a draw and a split decision loss.